I’ve evoked those words before when luck seemed the farthest thing from the truth, but there it is. At the end of a perfectly lovely autumn drive to Takhlakh Lake—Mt. Adams mirrored in its serene surface; and a hike to the top of the lava flow with its view of the fresh snow-covered St. Helens and the Goat Rocks, it was an hour before it would be dark and several miles before I returned to cell service range. When my clutch went out. Again.

It could have happened at the lake—remote and deserted. It could have happened on the forest service road I spontaneously veered off onto near Packwood that climbed up a mountain through the sun-drenched golden maples and where it could have been days before another car came and where the clutch pedal stuck as I was crosswise on the narrow road turning around, a drop-off behind me. I panicked then, until I remembered I could pull the pedal up with my foot and reengage the gears. I said “thank you thank you thank you” and went back down to the highway.

I should have taken that as a warning to stay on the highway, at least until I got to Morton and within cell range. But a few miles on there were hang gliders over Riffe Lake and it was a beautiful blue-skied late afternoon and the lake was sparkling in the sinking sun; and the squirrely clutch was forgotten. I turned down a gravel road to a boat launch to get a better look.

The pedal stuck again in the parking lot and was now that sickeningly-familiar loose and I knew I was in serious trouble. I ran a stop sign at the meeting of two inconsequential roads to get back to Hwy 12, where I had to stop. It wasn’t stuck anymore. It was dead.

Before I got to the next steps of walking around with my phone in the air and putting up my hood, a car pulled up behind me. Where did it come from? Not the boat launch. The cross road must have come from Somewhere. I jumped out before they could pull around me, praying that it be someone nice…and safe…and with a working cell phone. They were three women from Wisconsin, here on business going on a little adventure themselves and getting lost. I can tell you where you are if I can use your phone. They were looking for Hwy 12, which they had just found; and they had bars. (I need to change carriers.) I called AAA, and talked to a comforting voice who told me a truck would be there within 90 (!) minutes, and if it wasn’t maybe I could flag someone else down and call back. By then it would be dark and I would not be leaving my locked car, but thank you thank you thank you.

I called my sister and left a message that she would not hear for an hour and a half because she didn’t have time to listen to a message from Wisconsin that was probably a wrong number. Then a sheriff’s deputy pulled up to see if everything was okay. The women left to return to their warm hotel room and a meal, probably with wine, and the deputy pushed CuRVy out of the intersection into an abandoned driveway with room in front for the truck to back up to me. Thank you thank you thank.

I settled in to wait. This is why I never go anywhere without a book, a notebook and pen, and chocolate. This is why I have AAA-Plus. The three-quarter moon rose bright overhead as the curtain of darkness fell. I confirmed that my flashlight was indeed in the glove compartment, and worked. At 6:45 I thought what a good idea it would have been to ask the deputy to have someone check on me at 7:00. At 7:15 I was glad I also carry a blanket in the car as I had visions of an overnight; and toilet paper. At 7:30 I was getting a wee bit anxious. I had looked up to see every vehicle that went by on the road: at 7:32 what looked like a tow truck sped by and I commenced breathing. At 7:35 a sheriff’s deputy car pulled up and turned on his flashers.

He said his partner had asked him to check on me. I nearly wept. He called AAA for me and we chatted as I waited…and waited…for them to check on the whereabouts of the driver. At 7:50 the truck returned from the opposite direction.

My sister met me at the now-familiar transmission place; and sometime after 9:00 I was at my dining table with the hot meal she had prepared for us and Mama. And wine. 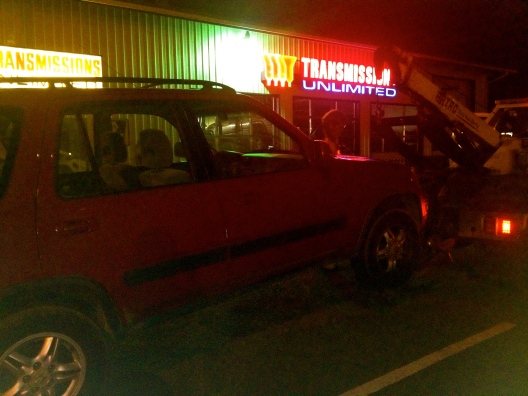