The day dawns yellow sun rising to cloudless blue. My destination sits at the end of the valley from my living room windows. I’ve picked my trail and can’t wait to get on the road. I enter I-5 south (I love not going north) at 6:30, adventure latte in hand (though not from my favorite kiosk, it’s not open this early on Sunday) a full half hour before I planned to leave the house.

I stop to use the facilities at Coldwater Lake and am the only one in the parking lot at the Hummocks trail head at 8:00. After donning the gel bunion guards that came in yesterday’s mail (who knew United Health Medicare supplemental insurance included $50 of over-the-counter health items a quarter?) and hiking shoes. Not knowing which knee will be bothersome, I put on both straps. Grabbing pack, water, and trekking poles, I’m on the trail at 8:15. I’m still the only one here as I head up the first half mile of the kid-friendly interpretive trail before branching off on the Boundary West trail toward Johnston Ridge Visitor Center.

It’s always been my policy not to hike anywhere I can drive to; if it’s not going to be easy for me, I don’t want it to be easy for anyone. But the visitor center is not my destination, it just happens to be a not-particularly-welcome feature on the route.

The trail zigzags through the North Fork Toutle River valley, the spoiled mountain at its end, through alder thickets that provide shade in this valley that was made a wasteland in May 1980 after 600 feet of debris filled it. It’s green now, and red and purple and white as I get higher. The red vines of wild strawberry network across the moss, connecting the once barren land back to its roots. Ants scurry across the trail. Birds sing in the trees.

I don’t like alder. I cut down two bushes in the sweet pea field below my house the other day. Here, though, I appreciate it. I hear my forester father explaining the succession of the forest after a fire, a clear cut, or a volcanic eruption. Not that anyone would have asked for the lecture. It’s why I cut it at home, though, I don’t want forest to take over the clearing and the brushy alder is the first step.

The valley is full of hummocks, the insides of the displaced mountain entombed beneath soil and vegetation now, and teeming with wildlife. Scientists, I read, have mapped each hummock to where it used to be on the mountain. That boggles my mind. It’s a graveyard, with tombstones and eulogies—at least in a computer somewhere.

Soon the trail starts upward and I leave the shade behind. I’m glad I’m early, it’s going to be hot this afternoon. Now, though, the breeze is almost alpine: cool, but without the high mountain alpine ambrosia of Mt. Rainier. I note that the noble fir are getting as tall as those at Paradise’s tree line.

As I ascend, the trail wanders through foxglove, lupine, daisies, paintbrush, pearly everlasting, penstemon, and prairie dandelion. Lots of prairie dandelion. In the wild, I wonder, are weeds distinguished from flowers as they are in the domestic garden, or are they all just wildflowers, of equal value and beauty? The blankets of yellow stretching across the acres at the higher elevations are just as much a wonder as the blankets of red paintbrush and of white daisies. In practice writing—writing in the wild—crap and brilliance is all just writing, of equal value. I make note of the flower varieties I see; my mother will ask. 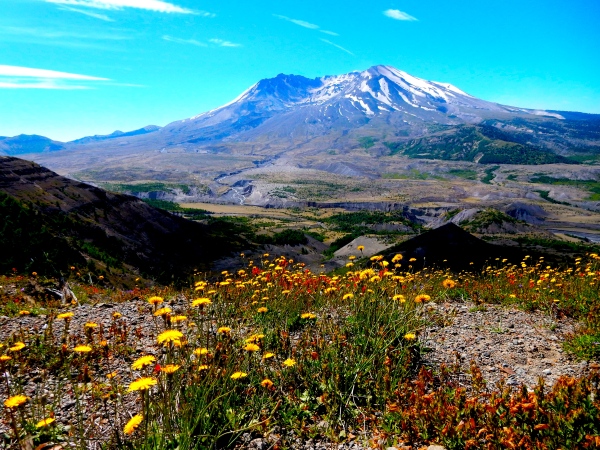 The trail narrows as it heads horizontally up the side of a bare face, loose gravel underfoot. My aeroacrophobia kicks into gear. This must be the “sketchy” part I read about in a Washington Trails trip report, that thinking about disturbed my sleep last night. I plant my poles and take it slow. Slower than a turtle slow. I’m glad no one is behind me, watching. I would look terrified to them, because I am. But not panicked. I can do this if I watch where every footfall is going to land.

I lose the trail. WTF? It definitely isn’t the direction I’m going. I look to my left. There is some indication that it goes straight up. It seems odd, but then everything about a volcanic eruption site is odd. I’m not sure I can do it, but neither do I want to retrace my steps. If the loose gravel was difficult to walk on coming up, it will be worse on the downhill. I take a deep breath and tell myself others have done this and I can too. I make the 90º turn to face the slope with no handholds, then glance to my left again. There’s the trail. It’s a freaking switchback. I was concentrating so hard on my feet, I didn’t know what was coming. I nearly weep as relief floods my body. Sometimes the best path is not the one you are on. I make the course adjustment and keep moving.

Finally arriving at the top of the ridge, I stop to breathe. I did it. I reached the level. Far below me is another party. The tiny dots are the first humans I’ve seen since I left the perky teenager at the coffee kiosk.

The sky, along with the blankets of color, plays a starring role in the day. I can’t stop taking photos of it.

Snow-covered Mt. Adams peaks up briefly over a distant ridge, while nearly bare St. Helens sits actively sentinel. (Is that an oxymoron?) I see a plume of smoke rise from behind the dome in the crater. I learn from a park ranger later that there is a plume every day, and I saw it! (Also that the dome stopped growing in 2008; and there are actually two domes, one that formed through the 90s and the other in the early 2000s.) The mountain is smoldering beneath its dead, grey, dry, desecrated facade; biding its time until it returns to violence. Meanwhile everything around it is coming back to life in defiance of what was or what will be. All there is is now.

There are a few more sketchy spots in the trail, level now as I circle the ridge rather than scaling it. My heart races a bit with each one. I begin to hear road noises, out of sight over the edge of the ridge until I arrive at Loowit Viewpoint, where there are a couple of cars, a handful of fresh-looking observers. I don’t tarry; I’ve seen better views. Another 3/4 mile and I’m at the visitor center; 11:30.

I decided as I walked I would take in the movie at the observatory, because it is in my opinion, quite simply the best visitor center documentary in the country. Not that I’ve seen them all. And because I can get in free with my Senior Access Pass, which is, quite simply, the best deal going. When I arrive, it’s 24 minutes until the next showing. I talk to the ranger about the return trip, the signage confused me. He confirms what I had somehow missed: this is not a loop trail.

I sit in the new amphitheater and eat my lunch. It’s weird to be in civilization in the middle of a wilderness hike. I don’t like it much, though the flush toilets and water bottle refilling station are not unwelcome. While I eat, I try not to think about the new information: I have to go back across the scary place on the downhill after all. Maybe its good we don’t always know what’s ahead, or we would never get out of bed.

I watch the movie—it seems to have been updated with new footage of the recovering landscape and the same spectacular footage of the eruption, the same surprise ending—and head back to the trail at 12:45. Beyond Loowit Viewpoint there is a family ahead of me on the trail. Annoying. I don’t think they are through hikers though, for one thing they have no water. They join several other people at a promontory. I don’t stop. 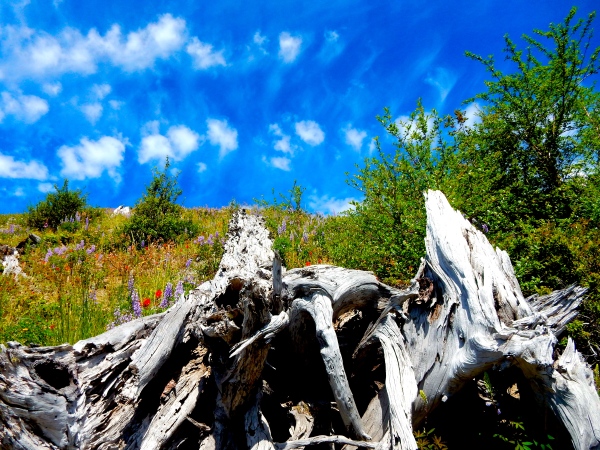 I step aside before entering one of the scary narrow spots to let a party coming toward me pass. The young man in front is wearing flip flops. Are you freaking kidding me? He looks European, perhaps from a place with no mountains. His two companions, however, are clad in travel worn, dusty hiking boots. Apparently friends do let friends hike in flip flops. I’m reminded of the plant identification hike I took on my hill after it had been raining for weeks. A woman in flip flops slipped and fell on the muddy trail and said, “There should have been a dress code.” People astound me. 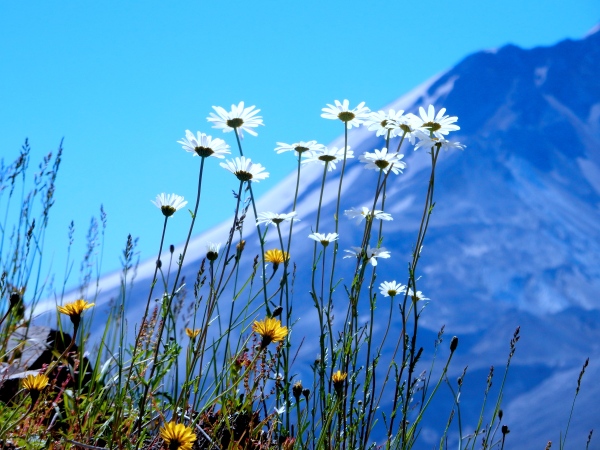 The vulture (I don’t know it’s a vulture until I get home and look at the pictures I took, none of them good) I had been watching glide back and forth up the trail, suddenly swoops over me from behind then dives into the valley, spiraling down, down, down on the draft, then back up, apparently finding no feast. 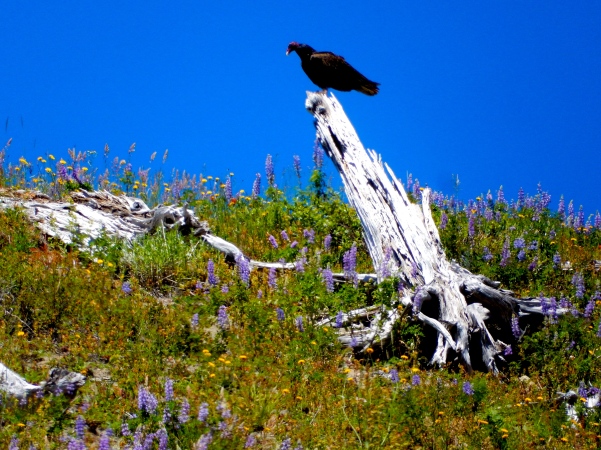 I’m nearly back to the valley floor when my shoe catches a piece of gravel and skids out in front of me. I’m glad for the lesson learned when I was learning to use my new poles: plant them wide, so when a foot moves without benefit of brain, you won’t trip over one. I’m also grateful it didn’t happen on the very scary part earlier, which wasn’t, by the way, as terrifying going down hill as I thought it would be. Things usually are scarier in the abstract than in reality. I wish I could remember that.

The third time my shoe skids, I flash back to learning to ride a full sized bike—a blue Schwinn handed down from my big sister when she won a brand new three speed for her grand prize entry in the Olympia pet parade. I was six or seven or maybe barely eight when I skidded into loose gravel on the shoulder of the downhill grade and went sprawling. I remember my mother picking embedded gravel out of my palms and knees.

I was hurrying when I skidded, trying to put distance between me and the chatty party of three behind me. They are too far back to wait and let them pass, but not too far to hear them. I try slowing down, but they don’t catch up. Finally they get close enough and I stop at a wide spot in the trail.

“Can you help me with my laptop? I keep getting a message that I have no security.”

And then they are gone and I return to solitude. I see no one else until I get to the last half mile, the Hummocks trail, where I meet many people, including small children. I hope no one is heading to the top, it’s darn hot now.

I’m back on the road at 3:30. I stop at Coldwater Lake and soak my tired feet for a few minutes before heading home. A shower and a beer on the deck are calling my name, along with the view of a distant mountain.