Okay. Done that. Check it off my list for this century. I’m a mountain girl, not an ocean girl; but it’s been so hot, the beach seemed the place for my adventure this week. I do try to go once a summer. I love the Olympic Peninsula beaches with their drift logs, stone beaches, tidal pools: Ruby (my favorite), Kalaloch (my parents’ favorite), Rialto and LaPush (farther afield); but since I’m camping at Oregon’s Mt. Hood at the end of the month, I decided to explore the Oregon beach too.

Here’s the thing: Oregon beaches have beach towns. Beach towns have people. I am not a fan of either. What was I thinking?

Cannon Beach was still socked in with fog when I arrived at noon, and crawling with tourists from full-up motels and rental condos, no parking. I figured I would find lunch, check out the beach access, drive farther down the coast if it didn’t look interesting there. Short version: Getting lunch took much longer than anticipated, beach was boring and crowded, drove on.

I parked in a nearly full state park lot and headed to the wide, sandy beach, fog still hovering just above the water. Why is it that people congregate at beach access points? It was swarming with beach umbrellas and towels, kite flyers and sand castle architects, dogs and coolers, a not-in-use volleyball net. Not many in the water: frigid, no doubt. These people would love the southern beaches on either coast. But in the PNW you don’t wait for appropriate weather, especially if you’ve forked out the bucks for a condo vacation. 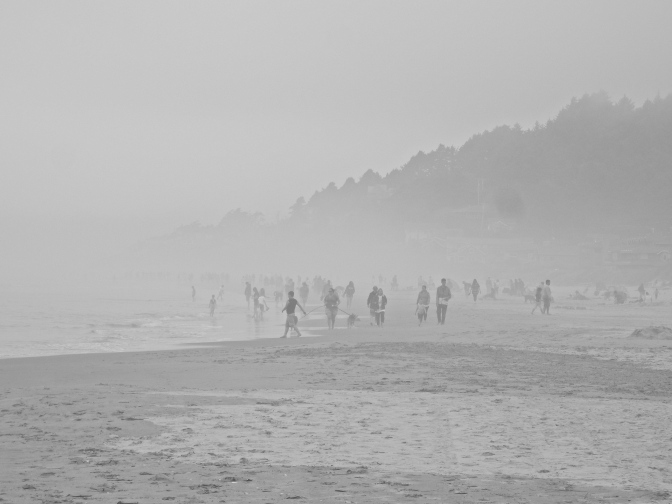 I walked down the beach and was quickly beyond the hoards. There was no wind—unusual at the beach in this corner of the country—so not uncomfortably cool in spite of the lack of sun, and that I left home in a hurry, forgetting a jacket.

It was a black and white photo day, even without adjusting the setting on the camera. I loved it in the end; and I’m not a fun-in-the-sun beach person anyway. It’s the kind of undistracting weather that gets me into myself. Here’s where this tale gets interesting.

I walked until I got to the “haystacks” and to where the headland stretched out into the sea. I hadn’t checked the tide table, and the fog-shrouded haystacks and the secrets their tide pools hold were out of reach.

Clambering over the rocks, I found a private beach, save for the gulls. Though it’s true that I saw only a half dozen people since I left the crowd at the access, from here I could see no one nor be seen. Sadly I saw no puffins; maybe if I’d had binoculars, or been looking harder.

I didn’t stay long; I wasn’t sure if the tide was coming or going and I didn’t want to get stuck. But it was long enough to get my heart going in love for this wild paradise I have come home to. The waves rose and broke as they crashed against the rocks off shore. The gulls shrieked. The trees high on the cliffs above me, permanently bent in the direction of the relentless prevailing winter winds, are evidence of who is in charge here. And it’s not the humans.

A friend asks me over and over what it is that brought me back here. “It’s home,” I tell her, “it’s where my soul needs to be.” “But what about it?” she persists, urging me to get to the bottom of it. She’s not satisfied with my vague response: the mountains, the trees, the hills, the valleys.

I love it here because I grew up here. Like other people love Texas or Kansas. She tells me she is from here—well, from the other side of the mountains, which is not the same—but she doesn’t yearn for “home.” She most feels home in England, where she has never lived. She tells me she loves England because of its history, she felt it in her bones and in her breath from the moment she arrived on its soil at her first visit.

Finally, walking on this beach, I got her question; and she’s been hinting at the answer all along. It’s not that my answers were vague or untrue, but they were the “what,” even I wasn’t feeling the “why,” other than it’s home.

I love this land because of its history too; but because of its natural history. I love it because it’s “new.” I love it because it’s not ancient ruins and because—except for the Indian Wars, a horrific exception that can’t be overlooked—it isn’t built on a long history of generations of spilled blood. It was built from nothing, on the backs of hard-working, courageous men and women. There is no history other than the giant ancient trees that fall in the rain forest and become mother logs to new trees; the trees that fall into the ocean and move in and out with the tides, until they are tumbled bare and finally thrown up onto the shore where children play on them for a few seasons until they are washed back out in the next massive storm; the mounds in the earth from ancient volcanic eruptions; the mountains that still erupt. No one has tried to tame anything, beyond what they need to survive.

On “my” beaches farther north, there are no beach towns, no condos. In my mountains, there are no Gatlinburgs or Dollywoods. If people want to visit these places, they have to be okay with inconvenience and the whims of nature, maybe crappy roads. They have to be content with entertainment in the form of hiking and walking on drift logs. No one owns the land, other than the American people, and maybe some timber companies; at most some mom and pop cabins for rent.

Visitors come because they love the mountains and the sea. There’s no Ripley’s Believe It Or Not, no putt putt golf, no Waves beach stores. Even restaurants are hard to find at the Washington beaches and mountains.

My mother loved the Appalachian mountains of her youth because you can touch them, be one with them, climb them in a skirt. I love my northwest mountains because they hold all the power and we humans are small and insignificant. These wild places are impervious to and untamed by humankind.

It’s not because I grew up here, I realized as I walked down the beach, back to the crowd a few safe yards from their beach town. I am my parents’ daughter. My father grew up in the mid-west and as a boy, dreamed of moving west “until he was stopped by the ocean.” He’d never been west. My mother, at the beginning of America’s entry into WWII, put in for a civil service transfer to the Territory of Alaska. She’d never been west. (She only got to Spokane that time.) She was participant with my father, as they dreamed through the mail during the long years of war separation, that they would settle in the far west.

Love for this wild, nearly untouched land is in my DNA. No wonder I felt like a stranger in a strange land those 36 years in the southeast. I’m home now. My heart beats strong again, my lungs fully expand. My soul hums.

This is why I adventure, to access what I know. It’s never wasted time, even at an unfamiliar beach in the fog. Still, I’m sticking with the wild coast of the Olympic Peninsula and the not-to-be restrained mountains. Sayonara, beautiful tame Oregon.