I first became aware that I was a mountain snob when my family of origin traveled to Tennessee to camp in my mother’s beloved Smoky Mountains.

“When will we be there?” my disdainful sisters and I teased as we drove through the Park. “These are just hills!” we mocked.

We were growing up in the shadow of mountains in the Cascade range capped with snow year round, the tops of which were unattainable by mere mortals such as ourselves. Even the Olympics, with no year-round snow-covered major peaks, holds a rugged reputation and old growth forest. In the Smokies, on the other hand, you can hike to the top of Mt. LeConte (and we did), and drive to Clingman’s Dome, the highest point in Tennessee (and we did). (Later, one of my partners—I forget which one now—would call me provincial. “The Pacific Northwest has bigger mountains, bigger trees, bigger slugs,” I bragged. Neither partner was from the western half of the country, I might add.)

Never did I dream that one day I would move to the East coast, where for 36 years the Appalachians were the only mountains in my life; and for most of those years, I would have to drive great distances to get even there. I learned to love those mountains as my mother did, though it was a gentle affection, not head-over-heels rapture.

I cut my teeth and learned to walk at Mt. Rainier and Mt. St. Helens; but since I moved back to the PNW five years ago, I have camped at Mt. Baker and Mt. Adams, and in the Olympics. I have hiked at all those places and more, and loved every trail.

I decided it was time to stretch my legs beyond the Washington border. In late spring, I made a reservation at Hoodview Campground on Timothy Lake, near Mt. Hood—yep, all the way to Oregon—the last of the well-known mountains within a day’s drive of home.

I had visions of Takhlakh Lake, the remote Mt. Adams lake I fell flat out in love with on one of my first camping trips after my pilgrimage home, and returned to for a day trip in autumn. Mt. Adams reflected in the water, the morning mist, the moonrise behind the mountain, fishing osprey and soaring eagles. I was so enamored with the lake, for five days I left it only for the two hikes I could get to without getting in the car. Next time I’ll go a little farther afield, I promised myself. But I’ve been foiled in attempts to return by (1) the only rainy week of the summer, (2) fires in the area, and (3 and 4) last summer and this, a washed out road—unless I go all the way south to the Columbia and then back north from the other end of the road, reverse and repeat to get home.

So, last week, as August marched dry-eyed into September, I packed my camping gear and headed south in a drought. “It’s just a giant tittie,” an online writer-hiker-photographer friend said of Mt. Hood. I tried to keep an open mind, determined to shed my label of provincial.

Not My Mountain, the First Day

Once I get to the lake—which is two or three times the size of Takhlakh and, despite the long drive to get here and the fact that it’s the first day of school in Oregon, is hopping with activity—there is so much smoke in the air from wildfires to the east, I have no idea where to look for the mountain. Smoke fills my nose and burns my eyes, and blots out the blue sky and the sun. There is a ban on campfires, and it’s too hot for one anyway.

I set up camp, then take a nap before I fix dinner, which I had planned to cook in the coals. When I take my plate to my chair on the lakeshore, I find the wind must have shifted and the mountain is visible. I’m startled. I’m startled by how unimposing and unimpressive it is. My friend’s description of its shape is spot on—Lady Gaga type—but the “giant” is a stretch. I knew it wasn’t a big mountain—I’ve seen it from a distance, of course—but somehow I thought close up it would be, well, bigger. And it isn’t where I expected it to be: front and center in the V of the foothills. This lake isn’t situated right, I catch myself thinking; or the mountain isn’t; like someone messed up the design.

I’m up early the first morning to watch the sun come up, after lying on my airbed in the dark listening to a distant owl hooting and a band of coyotes yapping. There’s no color in the sky, and I can barely make out the mountain—and only at all because I know where to look—but I wait patiently with the ducks that swim back and forth in front of me.

Suddenly, there is the deep crimson ball, sliding up from behind the trees. It’s a color only achieved when there is smoke in the atmosphere. And it is breathtaking. Its wavy reflection stretches across the lake, not for the mountain, but straight for my chair, as if begging me to dance, or maybe pointing a smiting finger at me for wishing I were at a different lake by a different mountain, turned golden by the rising sun, where fish leap and ospreys plummet from the sky, hoping to catch one. 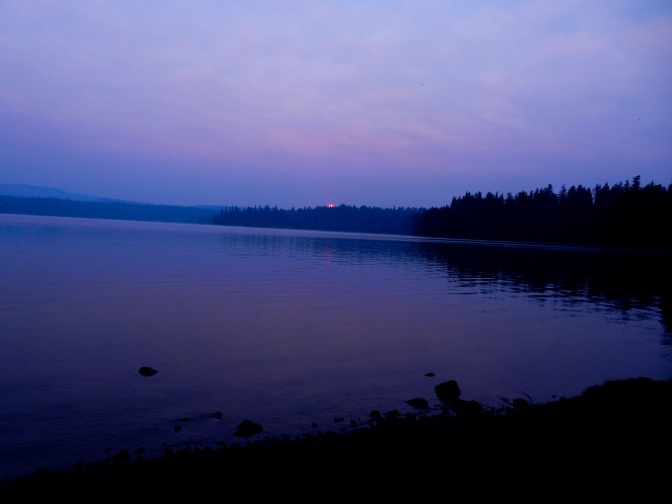 A man standing at the end of the nearby dock lifts his bass recorder and accompanies the dawning day; but, as if afraid to disturb those who are still asleep in their tents deep in the trees and missing what will surely be the best moments of the day, sounds only a phrase or two. The deep, haunting notes are a perfect accompaniment.