As I write this, five days after my return to Washington, Mt. Hood National Forest is on fire. I’ve spent too much time this afternoon looking at photos, and I’m sad and sick. I feel bad for dissing Oregon, because it is—like all of our vast country’s natural areas—a national treasure. Roads I was on are closed this week, including the interstate that passes Multnomah Falls. Trails and campgrounds in the area of the one I enjoyed are closed, threatened, or—at best—inundated with smoke that blots out the beauty. Part of the Pacific Crest Trail adjacent to the portion I hiked is closed.

At least one of the Oregon fires is believed to have been started by reckless fireworks. More than 30,000 acres are currently burning from that one fire that joined up with another one. The Washington fire near Mt. Rainier in the Gifford Pinchot National Forest—where I hiked last month— was, I heard, thought to be ignited by lightening.

I looked at the fire incident website, and counted well over a dozen active wildfires in Washington and Oregon. My forester father would say fire is nature at work; it makes for healthier forests. But these fires are threatening property, national landmarks, beloved recreation areas. Perhaps we don’t get to choose, humans are the interlopers here. But it is heartbreaking, particularly when caused by careless (read stupid) humans.

I am feeling very fortunate that, except for the beginning of my adventure, the skies and the air were clear. The wind shifted right after I left and everything changed again.

Not My Mountain, the Third Day

The smoke has cleared and the sun rises yellow instead of red. I’m ready and waiting for it. The man with the recorder is back with friends; and the chipmunk, that seems to sleep until just the moment the sun peaks over the ridge, then scampers out and worships with me before scurrying about looking for breakfast.

The mountain, if not soaring, is at least pointing into blue sky. I am eager to see it up close. 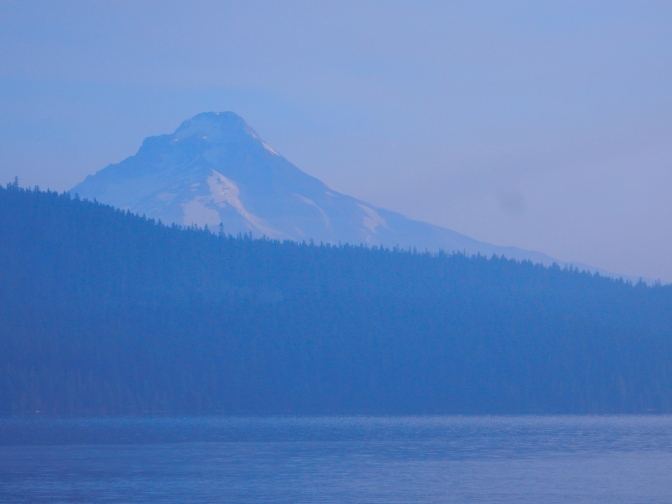 I quickly make a lunch and head out. An hour later, I am at its base. It’s a year-round snow sports venue! I had no idea. (The US ski team trains here in the summer.) Men (I saw no women) are clomping about in ski boots and hefting their snow boards. It’s weird.

There are ski lifts that go two-thirds of the way up the mountain. Could I say I climbed a snow-capped peak if I rode the lift? No trees, no meadows, no flowers. Just rock and dirt, and some snow. 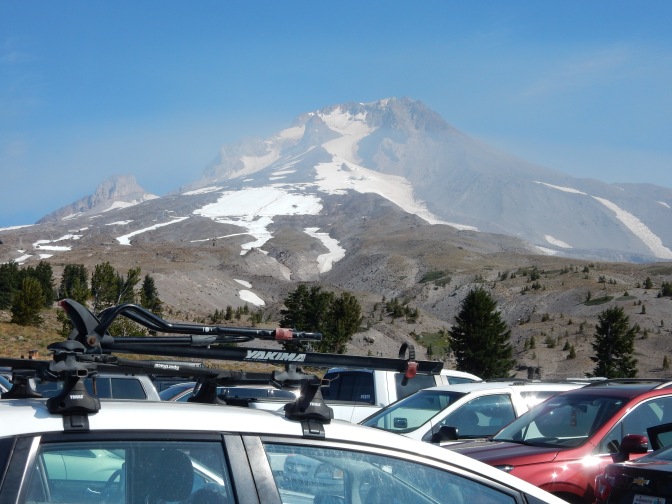 I go into the Welcome Center to see if there are hiking trails somewhere. Wrong place. I’m not renting skis, repairing a snow board, buying any permits. Nothing here for hikers. I move on to the Historic Timberline Lodge.

It’s interesting. Most mountain lodges with which I am familiar boast a massive room with a Paul Bunyon sized fireplace. This one is a hobbit warren.

I finally locate a trail map. The “trails” run horizontally through the dirt just behind the lodge. I can see them in their entirety from the parking lot. Maybe there is hiking on another side of the mountain, but thanks to the previously mentioned (in an earlier post) unhelpful ranger and no good websites, I don’t know where they are. (When I head for home a couple of days later, I take the back part of the Mt. Hood Scenic Loop and see one trail head sign and more than a dozen sno-park signs.)

I’m back in the car 30 minutes after my arrival, thinking I will try Mt. Hood Meadows that I passed on the way here. It sounds promising. It also sounds like it could be a horse race track. I Google it. (Oregon apparently has better AT&T coverage than Washington does, a perk I’m not entirely pleased by.) I’m close: Mt. Hood Meadows is one of Oregon’s largest ski resorts. And it closed in May for the summer in spite of having one of the best snow packs in history. Why? “Ski fatigue.” Though Timberline remains open for the diehards, it seems most Northwesterners want to hike and play in the water in the summer. Duh.

On my way back to the campground, I turn down the road to Little Crater Lake, which I had opted out of continuing to on the PCT yesterday. Turns out it’s a Tiny Pond, not much bigger than the potholes in the road to get there. But is is deep startlingly blue hole, as clear as a just-polished bar glass. The submerged ghost trees are eerie. I’ll let you read its story. 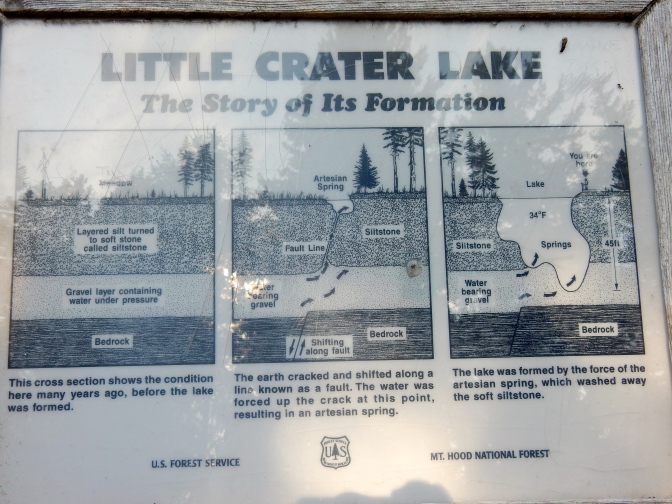 Once again, I’m ready to be back at my lake with the ducks and a book, and the lunch I took with me. Mt. Hood: been there, done that. 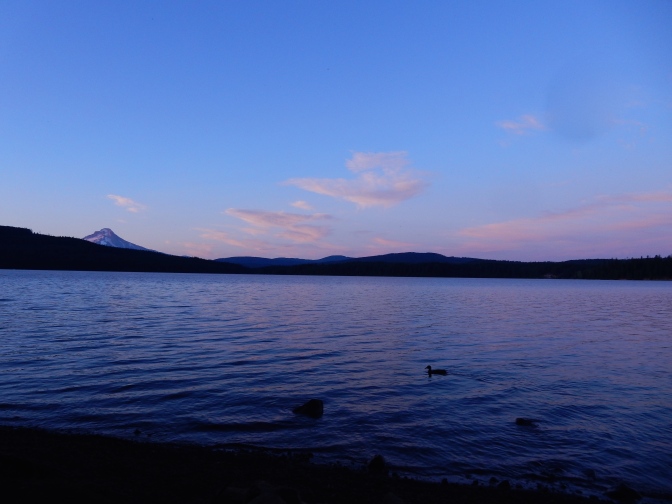