I am a Pacific Northwest native transplanted to the southeast for 36 years. In 2012, I returned to my childhood home and fell in love with this corner of the country again. I am a grandmother, a storyteller, a teacher, an attention payer, a hiker, and a back roads wanderer.

Not My Mountain, the Fourth Day

The morning sky is dramatic this morning, the mountain hidden behind clouds until the sun comes up. I eat my breakfast with the wildlife. 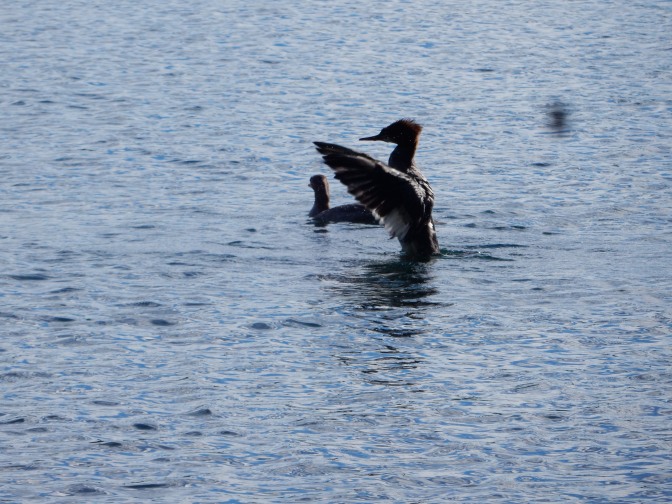 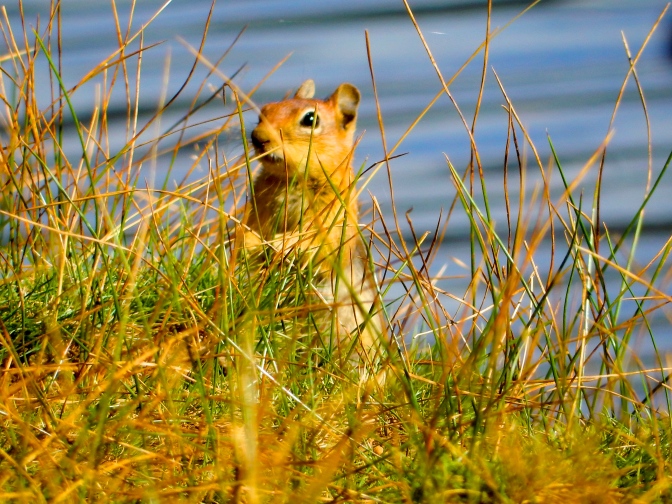 I’m torn between wanting to explore and yearning to spend the day at my campsite reading and writing. I’m becoming more sure, though, that I won’t be back across the border any summer soon, so I opt for a short explore.

There’s a branch off the road to the campground, with a sign pointing to “Olallie Lake, 25 miles.” I Google it. “Olallie Lakes Scenic Area,” “Olallie Lake Resort.” I picture the Olympic Peninsula’s Lake Quinault Resort. I will take my lunch and book in case it’s really beautiful and I want to stick around. Otherwise, I figure three hours, max.

I head out at 9:45, checking my odometer at the intersection. Eleven miles in, the road changes to one lane at a fork. Not one way, one lane, with frequent wide spaces to pull off. There’s a sign: “Olallie Lake, 28 miles.” I’m no math genius, but 25 minus 11 does not make 28. The only thing to tell me which way to go, is a 42 painted on the pavement. I hope I’m supposed to stay on the same road.

I go another mile and a half and there is another small road sign: “Olallie Lake, 28 miles.” Have I stumbled into the Twilight Zone?

Roadside bushes encroach onto the jagged margins of the pavement. At least it’s paved, and pothole free. I meet no cars.

Ten more miles and I see a T in the road ahead. And a car! And a sign! The cross road is a two-lane, with a newly painted yellow line down the center. I discover I had been holding my breath just a little. The sign informs I am in Bull Trout Country! And that if I don’t know, I should let it go. I don’t know if that means anglers can only keep the bull trout or only anything else. What I do know is, it’s not any help to me at all. Did I mention I have no map? (Though as I write this, I remember there might still be an old atlas in the drawer under the passenger seat. Too late now, and that road probably isn’t on it anyway.) I intuit that I need to turn right.

I pass signs to other campground along the way, but nothing about Olallie. The road follows the curve of the river that runs along side it, and is beautiful, but I begin to think I’m not in the right place. The 25 miles, no, 39 miles, has now been 50 miles. Did I miss a sign? Or…

I come upon a ranger station slash camp store, but I don’t see it in time to pull off. It’s several more miles, down the mountain, before I can turn around. So far this quick explore is more of an adventure than I had intended today.

In the ranger station/store, I tell the ranger/store clerk my confusion. She pulls out a map that is just a bunch of road numbers on lines with no pattern at all. But yeah, I was supposed to turn left at the Bull Trout sign. She highlights the route, xxxing out a road that is the direct line to my destination. “It’s closed,” she says. “Fire.” Terrific.

I head back the way I came. At the Bull Trout sign I look for what I missed. Or what was missing. There are two posts with NOTHING ATTACHED TO THEM! But, golly, I’m glad to know about the fish. 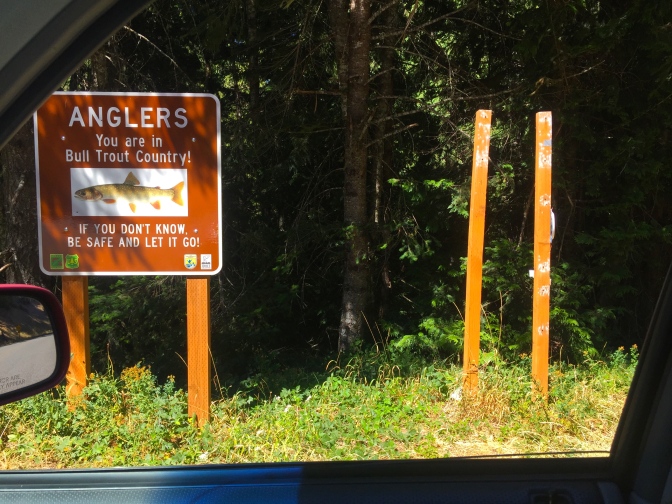 I find the turnoff to the lake: 14 miles farther. How could this part be 14 miles and the whole thing was advertised at 25?

After six miles, what had been fir forest, then mixed conifer, is now pine. I groan. My provincialism kicks in. I have no affinity for pine trees, nor for the environments in which they live.

With the change to pine forest, the one-lane paved road drops off to gravel with Honda-swallowing potholes. The speedometer needle hovers around zero. Eight miles of this? I consider turning around, cut my losses. But I’ve come this far, and my mother-grown curiosity to see it out wins the debate battling in my head. I have been meeting a fair number of cars. If I break an axle or blow a tire, I’m not alone. Did I mention AT&T in Oregon has its limits? If not for the pine trees, the road might have made me think the destination was worth the trouble.

There is also a Vanagon behind me. They apparently thought at two miles an hour I wanted to go faster, and they had pulled over and let me pass. I guess I was going faster, because I lost them in rear view mirror.

An hour later (eight miles, remember), I arrive at the lake, car intact. It is no Lake Quinault Resort. Though the lake is pretty, I immediately wish I had stayed put at “my lake.” But then what would I have written about? 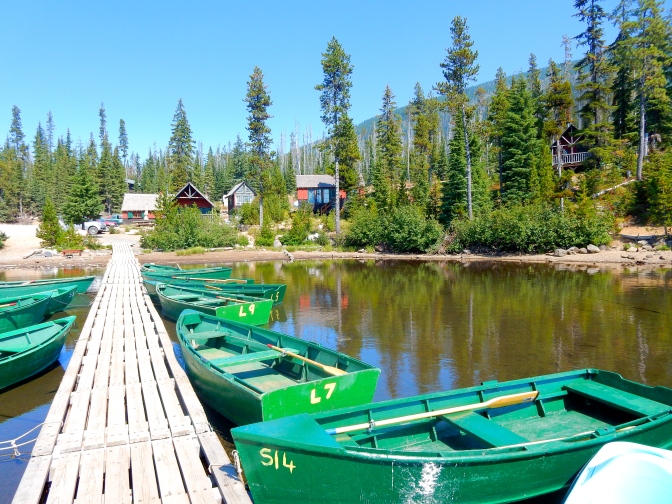 The Vanagon pulls in about 10 minutes behind me. They come here often, the husband tells me, and the road has never been this bad. When his wife returns, she tells me the road gets worse every year. But she has never seen it so smoky. “There’s a fire close by,” she says, confirming what the ranger told me. “And Mt. Jefferson is right there across the lake.” Not today. Later, when I look at pictures online, I see Mt. Hood is behind the cabins, as well. Not today. I feel cheated.

The resort is a stop on the Pacific Crest Trail. I wonder if Cheryl Strayed slept here. I need to reread her memoir. In back of the store, I find a box of items “for PCT hikers only,” and remember Cheryl left things in such boxes to lighten her pack. 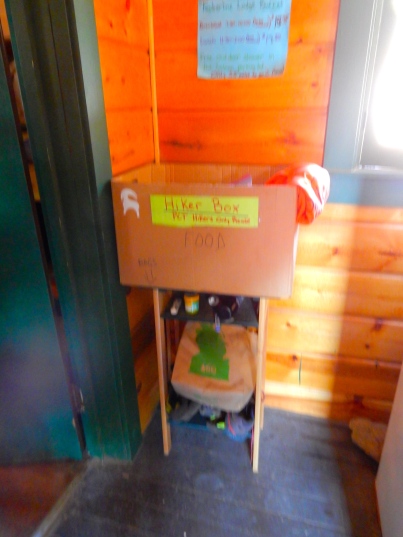 I eat my lunch with a pair of chipmunks. Cute, but I know their teeth are sharp and I don’t care to know how sharp. I snap a couple photos and shoo them away. Several times. Then return to my car. 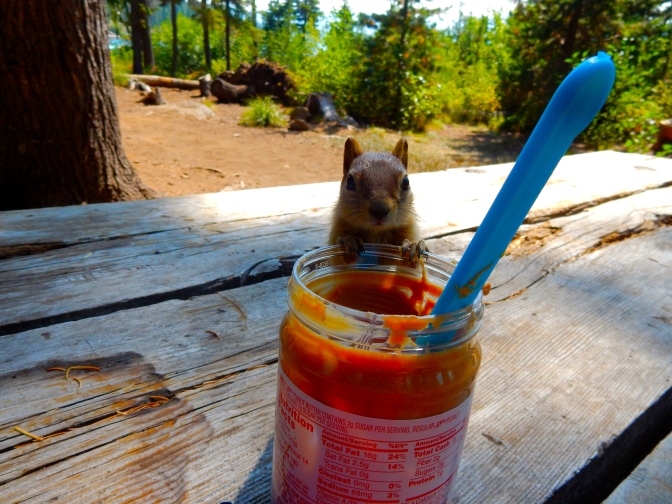 This time I can anticipate some of the potholes, and the eight miles takes just 40 minutes. Six hours, 125 miles later, I can at least say I have explored the Oregon back country. Still not my mountain. I pray the last beer in the cooler is still cold.

As of today, September 7, the Whitewater Fire has burned 13,000 acres. It was discovered two days before my excursion to Olallie Lake. Cause unknown.

I am a Pacific Northwest native transplanted to the southeast for 36 years. In 2012, I returned to my childhood home and fell in love with this corner of the country again. I am a grandmother, a storyteller, a teacher, an attention payer, a hiker, and a back roads wanderer. View all posts by Gretchen Staebler