I took a  break from memorial service planning and preparation to return to Lummi Island and my friend Joanna Powell Colbert’s straw bale house. Lummi Island hangs out in Puget Sound just off the coast from Bellingham—up there near Canada—in the San Juan archipelago. It’s just over 9 square miles in size with a permanent population of about 800. 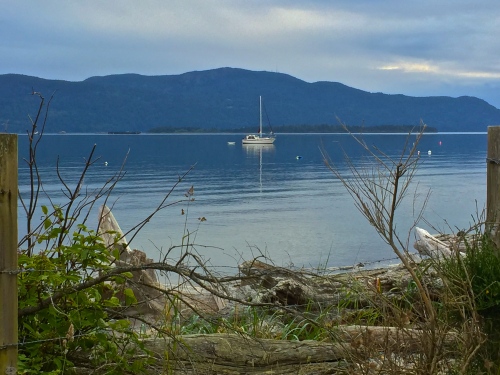 Last time I went just for island and writing time with my friend, taking a personal retreat from caregiving. This time I attended one of Joanna’s workshops, Tarot and Talismans. When I registered for this workshop, I was aware of the possibility I would have to cancel if my mother was in crisis. To hold my space in the circle with her gone now, was both freeing and bittersweet. 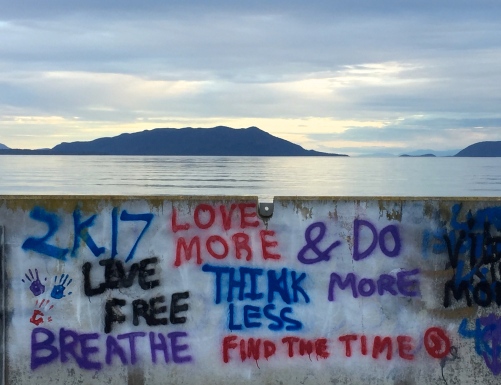 I fell in love with Joanna’s earth-honoring Gaian Tarot deck some years ago when I met her at my first Whidbey Island writing retreat, when I was at the front end of this longer-than-expected caregiving journey. I had never been a tarot user, but it was so easy to relate to Joanna’s natural world colored pencil interpretation of the traditional archetypes, that I have become a believer in their usefulness in helping me examine my life and consider my future.

The workshop was held at REC Retreats (Recharge, Enrich, Create) on the island, a one- and two-day weekend retreat center in the home of owner Kjerstin Secord looking into the face of Koma Kulshan (Mt. Baker). It’s something I hope for the future of my home, and Kjerstin generously spent a richness of time on her sun-drenched deck the day before the workshop to sit with me and talk about her experiences. So watch for that to join my Airbnb at Three of Earth Farm!

I didn’t sleep well that night, terrified of what I am proposing to do. Who do I think I am that I can pull something like this off? No, I can’t do it. I’m not good enough, smart enough, committed enough, young enough, connected enough.

Morning came and we seventeen women began in circle and intuitively introduced ourselves not by what we do, but by who we are: our wounds, our healing, our griefs, our joys. (Stunningly, there was another Gretchen in the circle. I have never in my almost 66 years had to put my initial after my name to distinguish between two people of the same first name.)

Our morning activity was to draw one card from our deck and, after examination of the details, symbols, and qualities it suggested, give the figure in the image a title and write a blessing. Later, in partnership with another participant, we wrote a blessing for each other. It was a powerful moment to bless a stranger and receive blessing in return.

We were given the choice of choosing a card randomly or looking at them face up and choosing one that spoke to us in that moment. I started to spread them on the table to draw from face down, then changed my mind. I put the cards back in a stack and turned it over to begin looking at each card for one calling my name. The top card was the three of earth. Tears gathered in the corners of my eyes and my heart opened. Of course that card chose me. In the death of my mother and my conversation the day before with Kjerstin about my future, this was exactly the one I needed. Maybe I can do this. The Universe will help me. 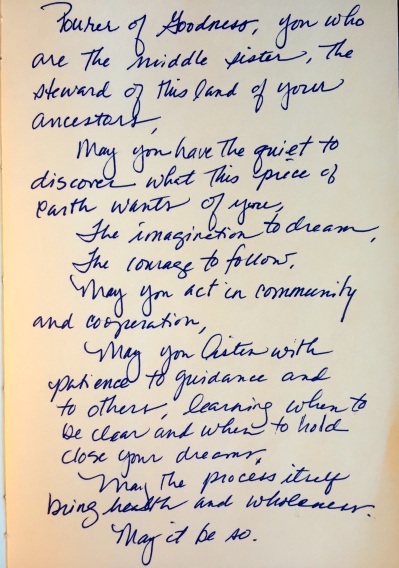 I chose Three of Earth for the name of this property—and my future here—because in the tarot something begins in the aces (my parents’ purchase of this property in 1960), is challenged in the twos (the death of my father in 1995 and my mother’s determination to take care of the family home as best she could), and is manifested in the threes (the next generation accepting, for now, the mantle). The threes also express the energies of abundance, harmony, community, pleasure, and manifestation—my dream of sharing this land with others and creating something of lasting value. Three is a mystical, magical number, as is this piece of earth.

In the afternoon, we made blessing beads and talismans. My mother’s celebration was on my mind, but I turned my focus to the farther future and found the Three of Earth card again in the box of tarot cards Joanna provided for us to tear up, asking for blessings on this path. 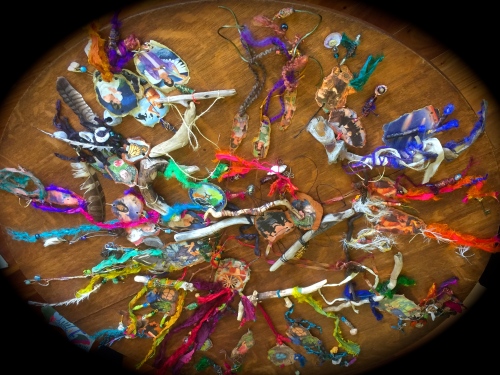 My friend Melissa and I boarded the tiny ferry in the spitting rain on Sunday and headed back down I-5 from our magical island time.

I’m back home now, watching my own mountain appear and disappear in the clouds, readying myself for the week ahead. Family will begin arriving today with my sister, my children on Thursday, Jo Ann’s on Friday. Some extended family and many friends will come together to celebrate my mother’s long life, lovingly planned by my sisters and me, on Saturday. And then it will be over. Or maybe it’s never really over.