Just when you think you’ve seen all the best spots in the Pacific Northwest wealth of best spots, along comes another one. Truthfully I never thought that, but maybe I’m nearing saturation of those my 66-year-old legs can get me to.

This hike from a remote trailhead on the “other” side of the mountain was on my list for last week, but smoke and heat kept me from it on the appointed day. Yesterday was looking good and I was at my coffee kiosk (Avenue Espresso on Main Street) shortly after 5:30. Still dark. (I’m ready for daylight savings time to be done. On the other hand, I get to see the sun rise without getting up at 3am.)

The sun rose on Herself in all her glory on the road to Tenino after a month’s long rest behind the smoke curtain. I was kind of sorry I hadn’t gotten up and out earlier and been closer, but later realized I wouldn’t have seen her at all as it was a three hour drive to the trailhead and she wasn’t visible again until an hour into my hike.

The official trail to Grand Park begins at the Sunrise entrance to Mt. Rainier National Park and goes through Berkeley Park where I went two years ago (read the Log here). I wanted to go on to Grand Park then, but it was too far and I still had the long exposed climb out of the bowl ahead of me. Since then I’d learned from an online hiker friend that there’s a back door ten miles up a, yep, Forest Road. Bonus, it’s a forested trail! “Grand Park via Lake Eleanor.”

The tiny parking area and trailhead is in the Mt. Baker-Snoqualmie National Forest, but about quarter mile in a low-profile sign—as in typed on a sheet of copy paper in a plastic sleeve—announces the boundary of the national park. 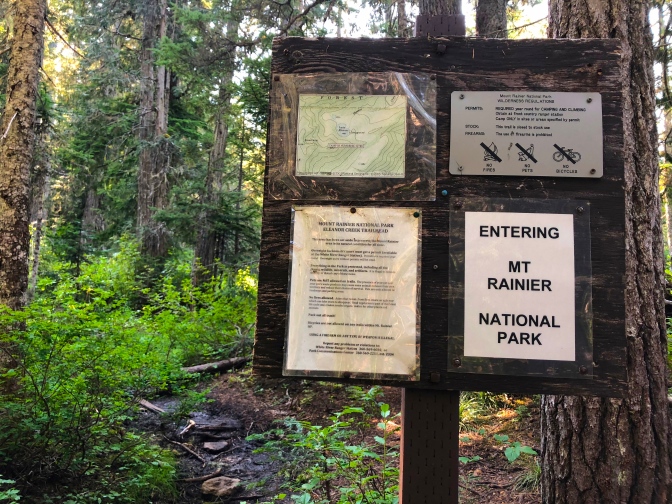 There are only two cars in the lot, a third arriving as I step onto the trailhead. I strap my bear bell to my belt. Huckleberry bushes with ripe berries overgrow the trail—I guess the back door doesn’t merit a lot of upkeep—and I start thinking it’s a good place for a black bear encounter and it feels isolated, especially after the driver of the arriving car passes me. I stop and get the bear spray out of my pack and move it to my pocket. A good-hearted friend gave it to me, not needing the extra in the Costco two pack. Like having a gun in the bedside table, I suppose, I wasn’t afraid until ownership of the canister made me aware of possibility. I kind of preferred naivety. Still, I’m grateful to have it. My mother would be pleased too. 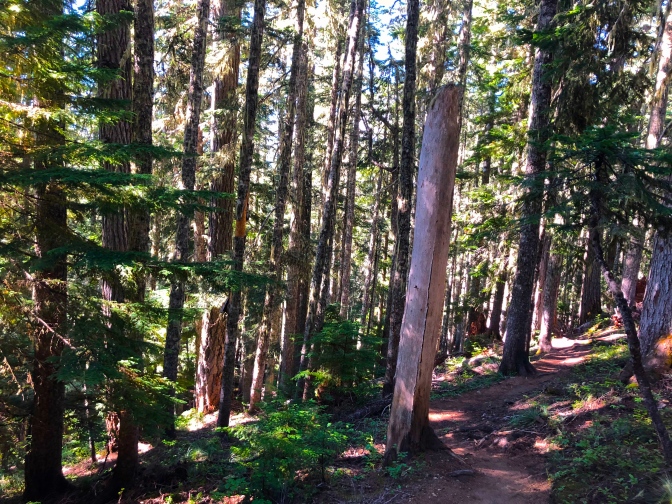 The hike to the lake is surprisingly easy; and a pretty little lake she is. I’m pretty sure I could backpack to it, and there are camp sites, should I be so inclined. 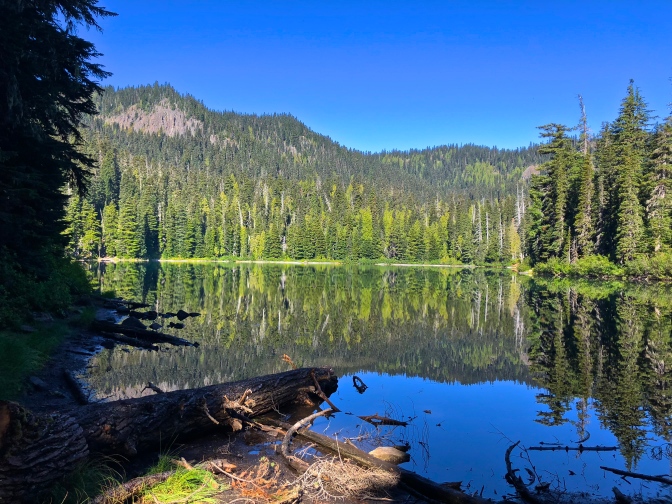 The elevation gain continues at a gradual pace to the small unnamed meadow, beautiful enough without even going on. And there She is, peeking up over the trees.

The trail plunges back into the woods after the small meadow, the mountain disappears. My pedometer battery is low, plus I still haven’t calibrated it, so I’m not sure when the pant-worthy upshit begins. I guess there has to be some to get anywhere good. 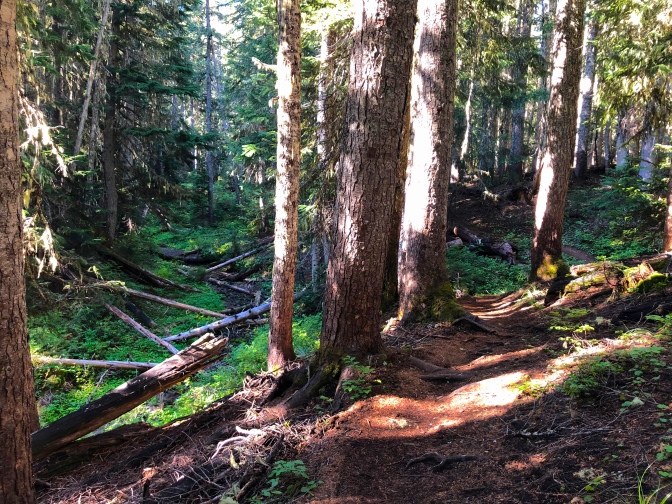 The wild flowers are gone, if there even was a show this year. I settle for dew on leaves, which is a welcome site after the weekend rain in the dry summer. There are some mud patches on the not-dusty trail. Asters are in various stages of the death spiral and a small patch of gentian still waits its 15 minutes of glory. Otherwise nothing. 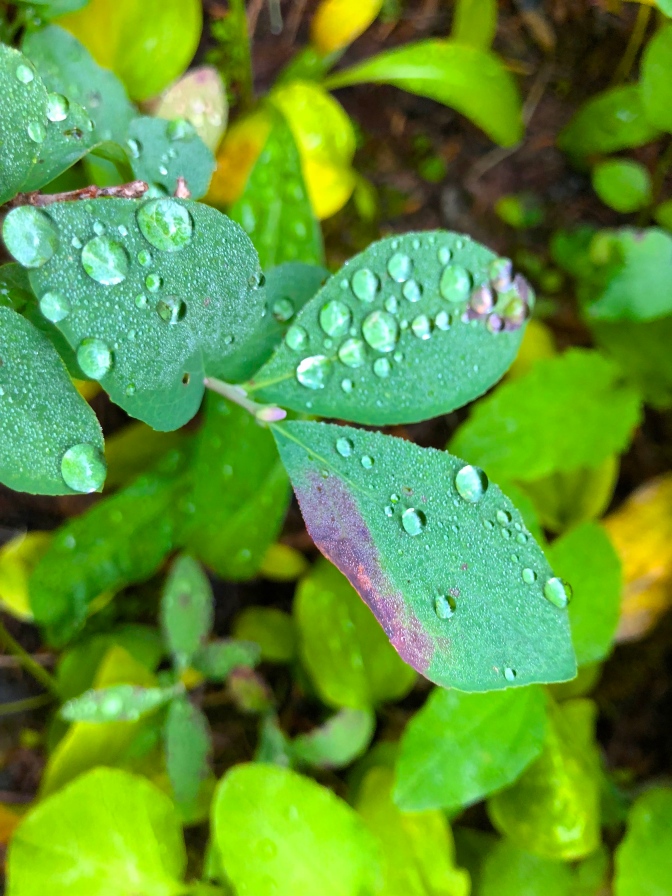 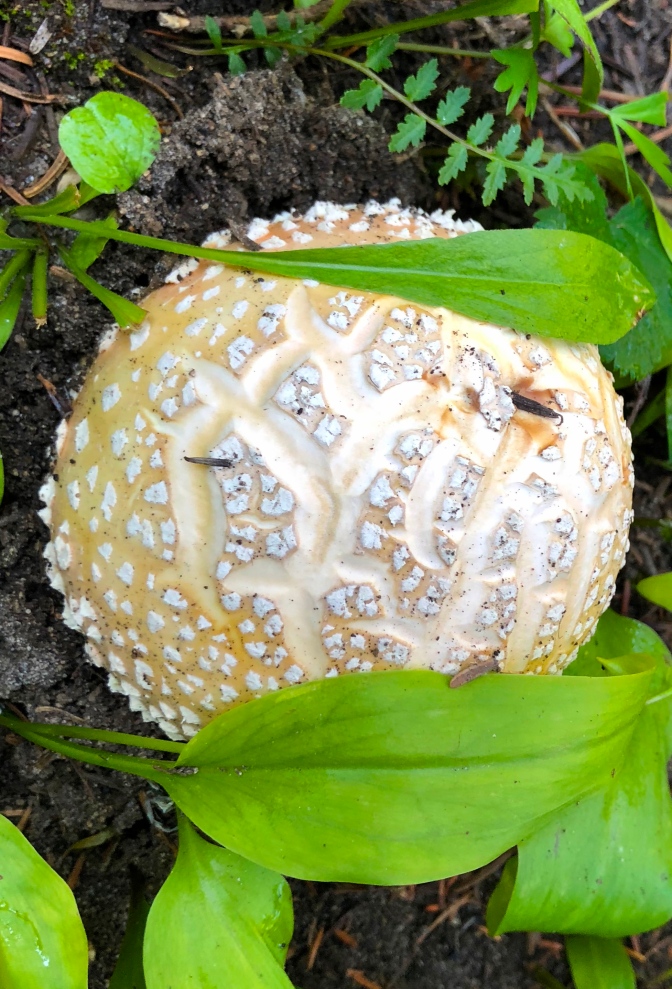 The trail levels out again before the forest ends; Herself appears once more and I know I’m getting close. The woodsy petrichor gives way to the heady scent of alpine fir with slight undertones of eau de smoke.

And then the deeply channeled trail soars into the open and I forget to breathe. Wow! I don’t even know how these places exist, these secret hide-a-ways the vast majority of humans don’t even know about. 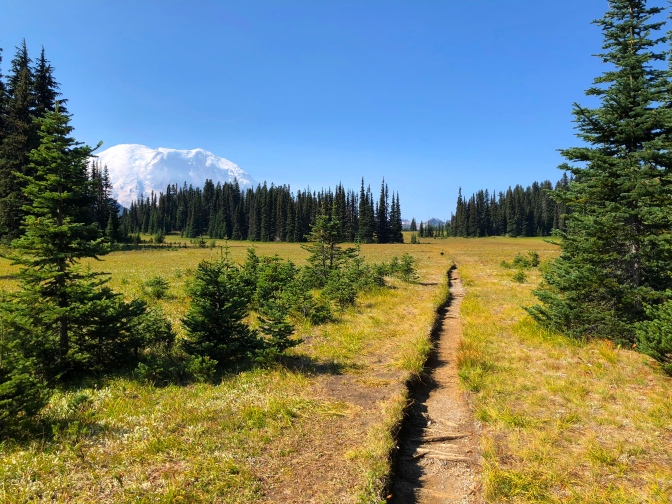 There is no cliched exclamation appropriate for the feeling of coming out into this enormous meadow. I run through every one I know. The strongest, “holy whatever,” are too mundane or crass. I can’t even form a word in my head that is pronounceable, like the so-called too-holy-to-pronounce YHWH. Like бесподобный. * 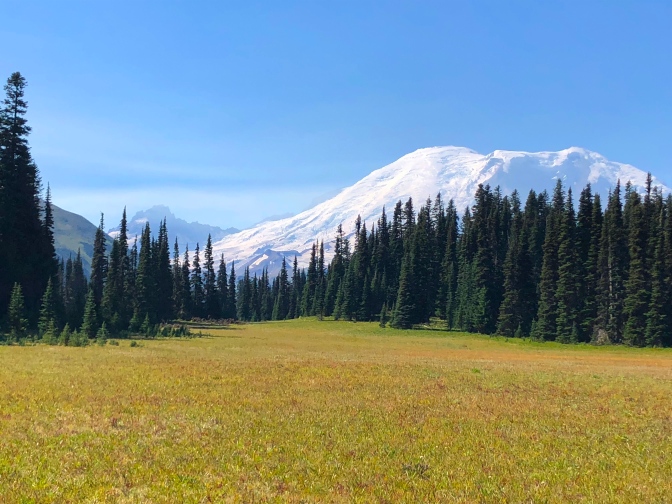 This park is an enormous meadow plateau with deep valley on two sides and trails steeply up to it on the ends; unlike Berkeley Park, which sits in a valley. I read when I get home it’s a mile and half long and half a mile wide. I’ve certainly seen expansive prairies before; but there is something about the high alpine meadow that sets it apart. You can’t drive to them for one. Most people will never see it for another.

And it’s silent. The only sounds are the call and response of the ravens, the buzz of unseen insects, the tinkle of my bell, and my boots thumping the sandy path. As I walk farther from the trees, the ravens quiet their voices, then oddly the insects stop moving their whining wings. I tuck my bell into its silencing mesh pouch, and there is just my boots. Until I stop them too. 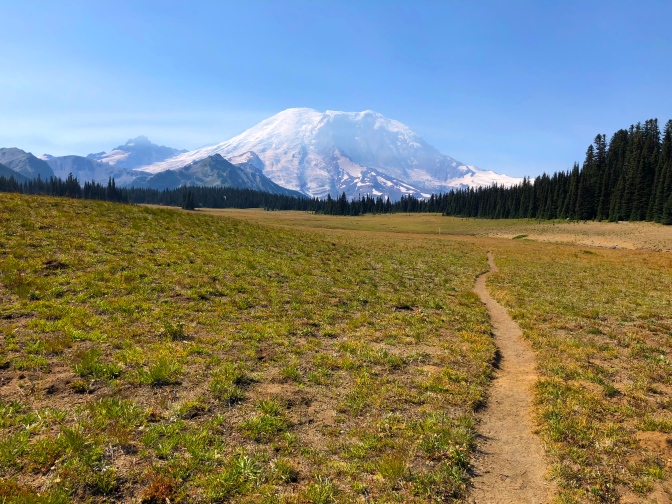 I’m beginning to think I’m going to have to make a wood chip inukshuk to show Mama the way, until I come upon a dry creek bed. I stack the rocks then sit with her and Her for a while. 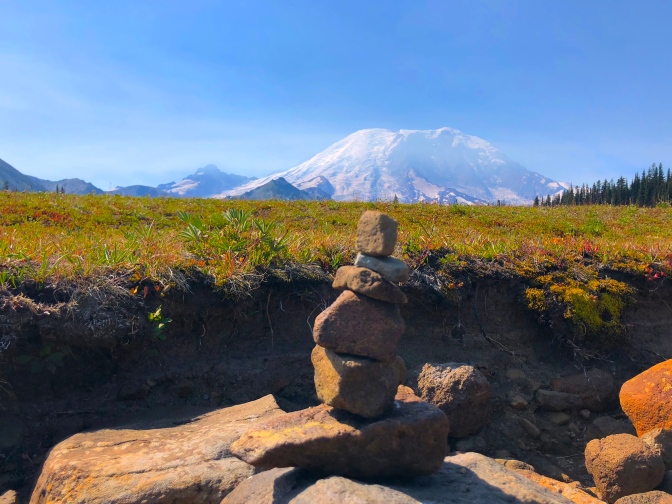 I read in a WTA trip report to head down a cross trail toward James Camp for a view into the gorge. Ten minutes later I stop to eat my lunch on the edge of the earth, the mountain reigning above and the White River far below. As a sit, the haze begins to move back in on the peak. I’m glad I got up early. 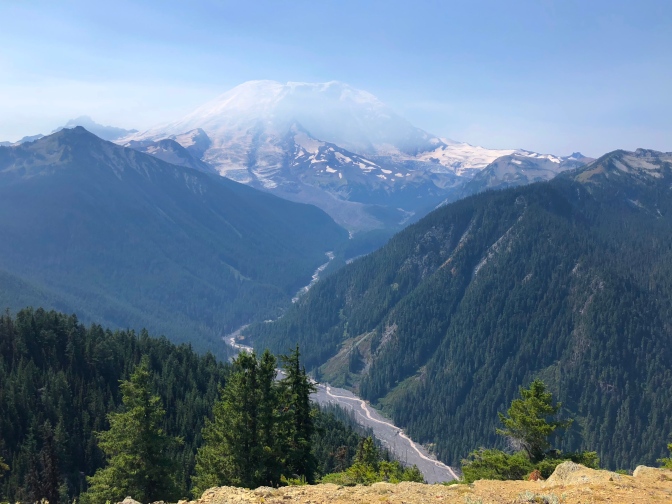 Back in the meadow (where the smoke scent has gotten a bit stronger), I can’t not keep walking. I set turn around goals for myself. “When I get to that next copse of trees.” “Just over that next rise.” “How can I not climb that grand staircase through this grand park?” I want to go until I get to where the trail heads down toward Berkeley. I’m probably almost there, just up that last series of steps, maybe. 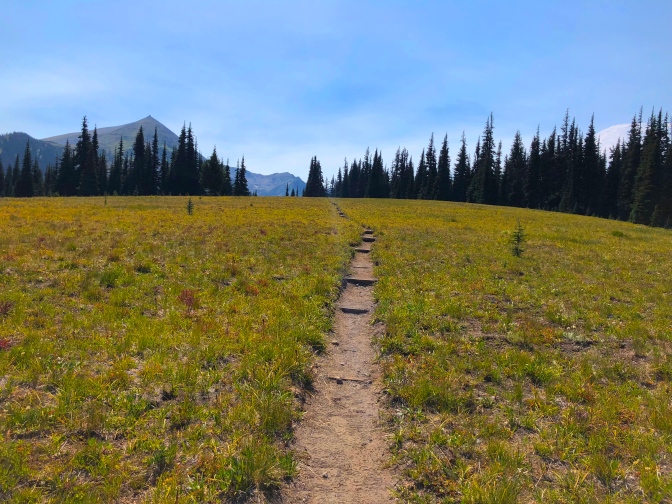 A newly familiar pain in my upper thigh is starting to hurt (I wonder what that muscle is; part of the hip I suppose, wondering if it will be my downfall someday), and I’m a long way from the car. This eight-mile hike obviously was measured only to the edge of the meadow and will be 12 miles by the time I’m back. 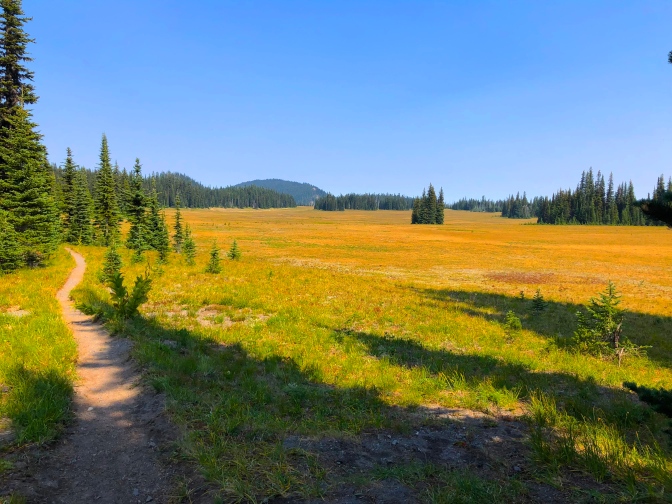 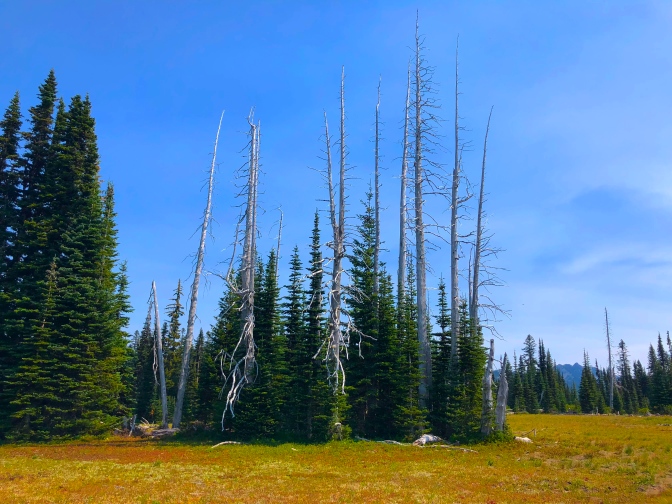 As I walk back through the meadow, a bald eagle circles and soars over my head. I will be back. I’ll keep coming back until I hit the narrow, ever-changing window of wild flower bloom on a perfect clear day, or until my legs can’t carry me.