It wasn’t my usual hike. First, it wasn’t in Southwest Washington. Generally I stay close to home, exploring the South Cascades and the Gifford Pinchot National Forest, straying no farther north than Mt. Rainier National Park. But the trails my heart and feet itch for are still under snow. I have a list of hikes I’m watching trip reports on for wildflower emergence when the snow melts. I think it might be a year of favorites rather than new explores.

But this week, I decided to head for the Central Cascades and return to Seattle for the night, followed by my the day with my grandkids. It shortened the day not to have to repeat the three or four hour drive to return home.

My first pick was Lake Serene and Bridal Veil Falls, but I was scared off by WTA reports of “it was harder than expected.” Maybe another day. Or not. I don’t usually think to choose state park hikes, but at bedtime the night before my intended outing, I was ready to give up finding any place appealing and stay home, so I latched on to Wallace Falls. I am a sucker for waterfalls, and this hike has three major ones!

Wallace Falls derives its name from Kwayaylsh, the surname of the first homesteaders in the area. If that had been its name, I probably would have been attracted to it sooner.

I was up early, my driving route planned, hopefully, to avoid traffic by staying off I-5. (It’s also, like most hikes in the Central Cascades, popular; and I prefer to hike alone. I-5 and popular are two more reasons I don’t go north to hike.) I was at the espresso kiosk at 5:30; and soon after, road latte in hand, winding east through Tenino and Yelm. An early start from home, though, even staying off the interstate, put me at the one high traffic stretch of road (WA-167) squarely at rush hour. No matter where you go that is basically north, you have to go near Seattle.

There weren’t many cars in the parking lot at 9:30, thankfully. I used the flush toilet and hot and cold running water (nope, not my usual hike) and headed out the wide trail under the power lines.

The trail did cut off then, eventually narrowing; and, sans alpine scent and wildflowers, was more like a wilderness trail, winding beside Wallace River. The babble, sometimes escalating to a roar, of the river and the crashing of water plunging off the mountain— dropping a total of 1000 feet—as the trail approaches the three falls, followed me as I hiked.

I was met at the trailhead by a quote from William Wordsworth, part of which was a favorite of my mother’s, though she didn’t remember who said it first. My hiking day was between the anniversary of her Celebration of Life and what would have been her 103rd birthday. She met me at the trail and I carried her with me. 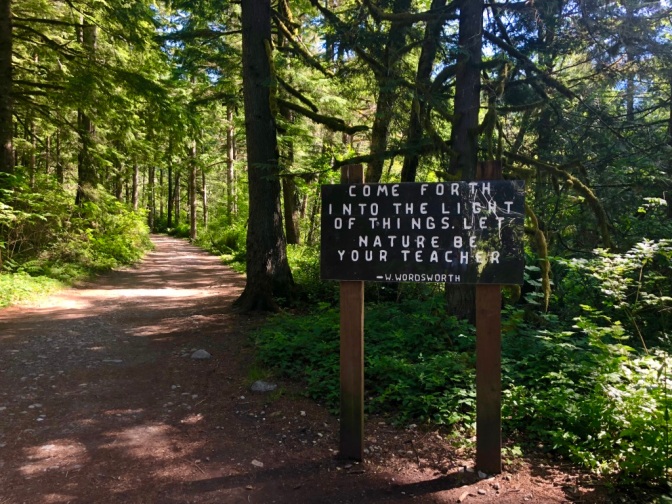 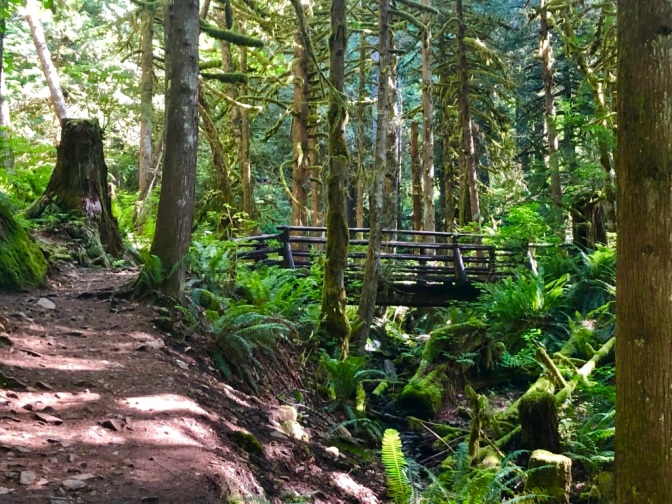 The trail has many steps, several bridges, a picnic shelter, signage, and multiple fences. I wondered if all that treated lumber gave the trail its somewhat funky odor. The signs warning that falling off the edge and plummeting hundreds of feet “could cause death,” amused me. But when, on my return to the parking lot, I met people in sandals and carrying purses, it became a little more clear.

The middle falls and the valley overlook (I like open places) would turn out to be the highlights of the 5.5 mile round trip trail, but I didn’t know that, so I pressed on up the “more difficult” section with its switchbacks, roots, and large rocks, which certainly earned it its difficulty status. 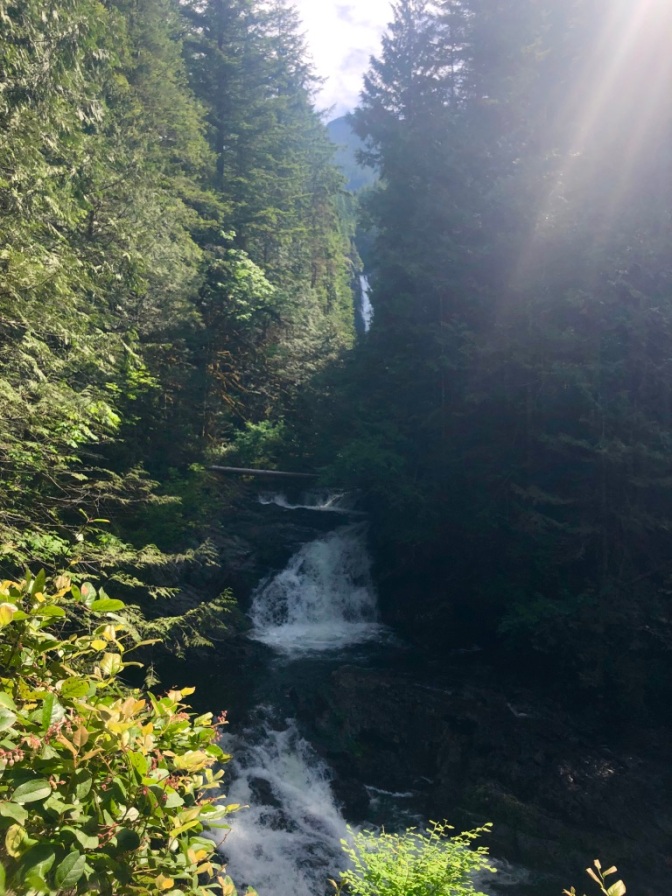 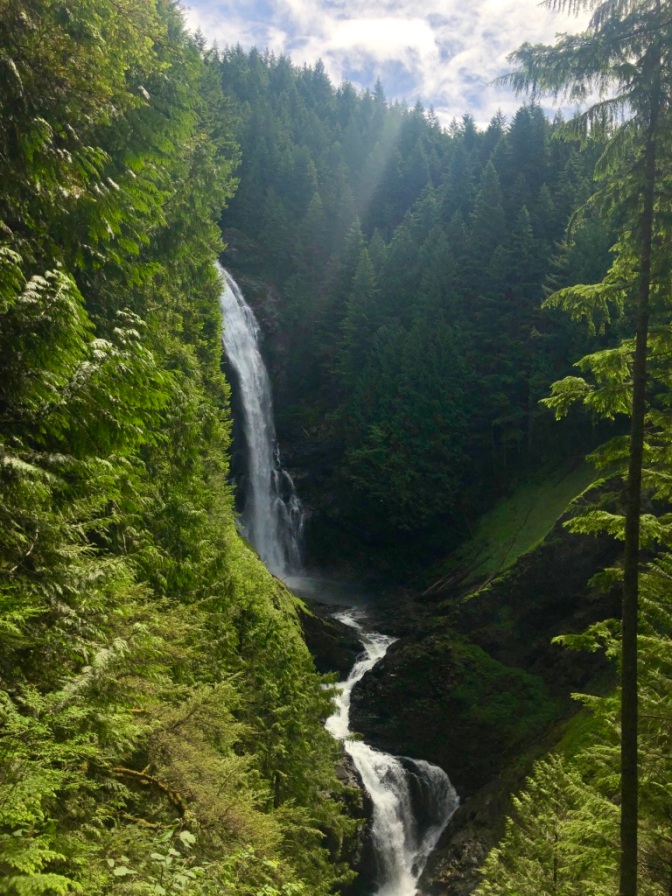 Many dogs and people accompanied me, particularly on the way down after lunch when the trail became kind of like WA-167. I imagine the weekends are like I-5 through the Tacoma curve. I think I’ll stick to the southern trails, and hopefully one day get back to the far north, staying clear of the middle. I’m a country girl, not a city girl.

As I wrapped up the hike, I met a couple a bit younger than I. (Why is it that somewhat younger people make me feel my age more than much younger ones?) “How far did you go?” he asked. “All the way,” I said, not without a bit of pride—though it was far from the most difficult hikes I’ve done—maybe sensing he thought I looked old enough that if I had done it, he would have no excuse. “How far did she say?” she asked him after they passed me. “All the way,” he replied. It was some 17,000 steps—according to the app on my phone—on 66-year-old legs. I throw that age in because I have only a few more days before I have to advance it. But I have many more hikes. 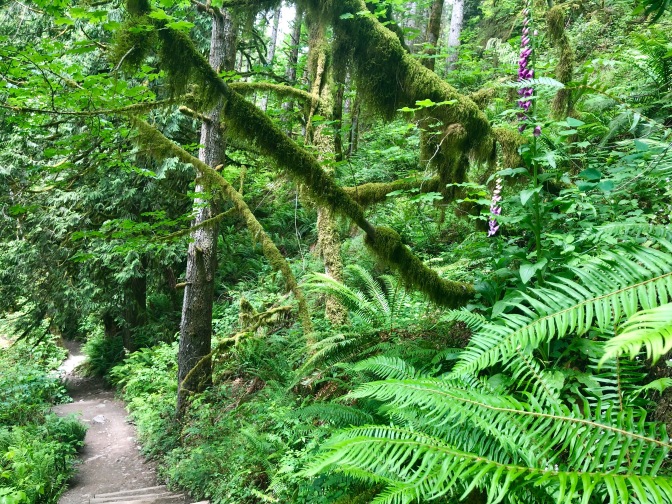 Before I left home, I took time for my daily card draw from my new tarot deck—The Herbcrafter’s Tarot—to see how it might inform my day. I drew the Adelita of Water, I’m not kidding. The Adelitas (or warriors) correspond to the explorers cards in the Gaian tarot (my other deck). The Adelita of Water is “committed to nurturing her spirit. She knows that time alone allows for the discovery of her innermost desires.” It was affirmation that I chose the right hike.

I’ve been drawing warrior, mother, and healer (explorer, guardian, and elder) cards ever since this deck arrived in the mail several days ago. As I work on my memoir of my mother’s last years and, simultaneously, work to restore this property my family loves, I’m reminded that I am doing good work; that I am where I am meant to be at this time of my life. I am walking through the second half of my sixth decade with one palm face down, grounded in this property; and the other face up, hiking into the unknown, open to mystery.

The day after my hike, I spent my last weekly day of the year with my youngest grandson. It was bittersweet. There are many more days with these little guys, but the three years I spent time with them each week as part of their care team, will forever hold space in my heart. (You can read a bit of that journey here.) As a friend said, who followed a similar journey of caregiving for both a parent and grandchildren, now I get to watch them grow up. And who knows, maybe they will hike with me one day.