Just over a week ago, I was walking through the California redwoods. I live and hike through old growth forests in the PNW; I know big trees. But nothing prepared me for these giants. In Washington’s forests the big ones are scattered in the forest, and the biggest ones warrant at least a small sign at the road if they are close enough. In the Redwoods National Park, the forests are full of unsigned monoliths so awesomely huge in girth and height I can’t take a deep breath without crying.

We learn there has not been a fire in these forests in 300 years. Their spongy bark retains moisture, making them nearly impervious to fire. Though lightening, it is guessed, has scorched individual trees through the ages, fire doesn’t destroy these forests. They are also resistant to insects and disease, hence their ability to grow old-old—and mammoth. There are fallen trees on the forest floor, but nothing like the number that litter the mixed conifer forests of the Olympics and Cascades. Both those standing and those fallen, can’t be captured in a single photo or contained in a single breath. 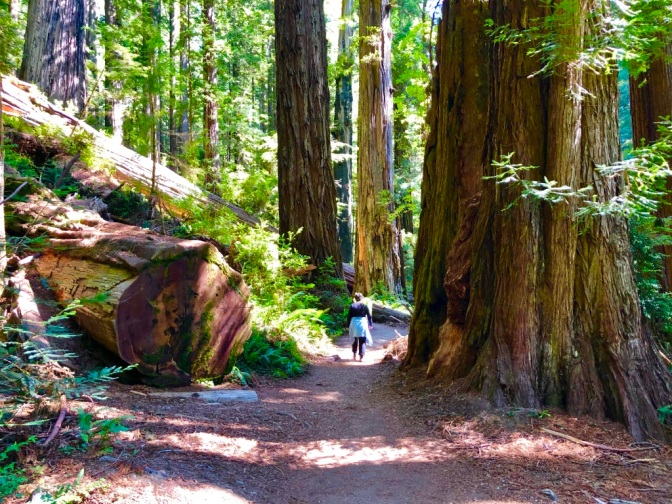 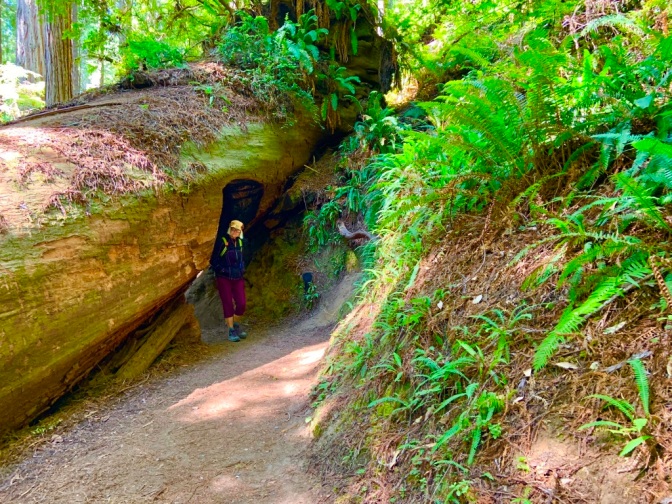 We walked in silence, my friend Vickie and I. It felt nearly impossible to use our voices, as if talking would violate the sacred sphere. The ancients standing tall in the silent woods felt like my mother and my father, my grandmothers and grandfathers, my 10-great grandparents. The ancestors, standing here for eternity. 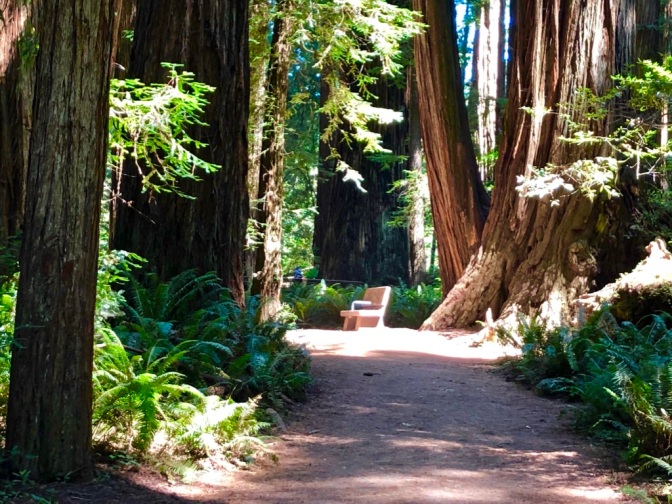 On Monday, Vickie’s last day in the PNW, we take a spontaneous drive to Paradise. Her Facebook memories that morning, inform us we had been there on this very day when she last visited six years ago. The two parking lots—holding 400 cars—are full and I succumb to using my mother’s handicapped hang tag, justifying its use with a flare up of Vickie’s recent knee injury.

Above timberline, Herself rises tall and proud and I again feel in the presence of permanence and power, of the Holy. Rainier is, of course, an active volcano. Her surface is constantly changing as glaciers melt, and some day she will blow. I pray not in my lifetime, even as I am aware that eventually one of my descendants won’t know her as I have, just as my children don’t know her sister St. Helens as I did. It grieves me.

We sit on the porch at Paradise Inn after a modest walk along the asphalt paths, not here this time for strenuous hiking, but rather to be in Her presence on a gorgeous day. A table of older women is at our back, one of them at least, having returned from something more ambitious than our hike. “I enjoy,” she says to her companions, “that I had good knees in the past, and now I don’t have anything to prove.” Vickie and I smile; the quote of the day. Six years ago, hiking the High Skyline Trail, we heard, “Why would anyone ever leave here?”

I eschew the crowds at Paradise for the most part, but I accept its accessibility for all. I started to enumerate the number of languages we hear as we walk, or at least the number of parties not speaking English, but quickly lose count. It’s an international babble. Shakespeare had it right.

Yesterday I returned to Rainier, the other side, to hike again where I went last year for the first time: Grand Park via Lake Eleanor. I am hoping for wildflowers this time. I get an early start and am treated to the rising sun.

I congratulate myself on, for the first time, navigating the paved road portion of the three hours drive to the trailhead, missing none of the many turns and road changes through tiny towns. Determined to do it flawlessly, I have detailed written directions, plus My Rogue map and GPS. Then, engrossed in Michele Obama’s audio book description of her and Barack’s first and only date night during their eight years in Washington, four months into their presidency, I miss the cutoff onto the forest service road. Forgetting I missed it last year too, I drive ten miles with increasing uneasiness before deciding I truly have missed the turn.

I arrive at the end of the gravel washboard, potholed road 45 minutes later than I had guesstimated. 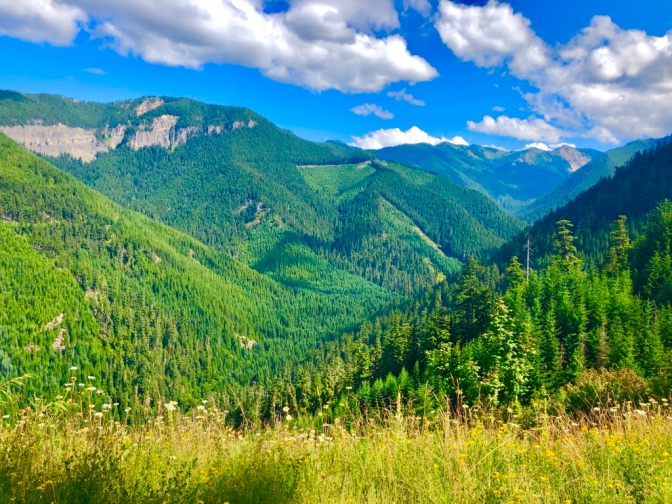 I hoof it up the trail faster than usual through the second growth forest that seems positively diminutive, eager to get to the meadow. Grand Park is an enormous alpine meadow with Herself reigning large at the south end. Like the Redwoods and Paradise, this place takes my breath away, and I can’t wait.

At half a mile in, I catch up to and pass two (chatty) oh-hell-the-yeah younger women. My strong body makes me happy. Not that I have anything to prove. The problem with passing talkers is that I have to put distance between us to avoid their even louder voices from behind—and be vigilant in not letting them catch up. It is robbing me, I realize, and a mile later I let them pass me and get ahead, noticing that one of them has two poles strapped to her backpack. I don’t know what they are trying to prove, as they huff past me, later stopping to rest while I pass them again.

I pause at Lake Eleanor to take the same photos I took last year and swore I wouldn’t take again. There are many wildflowers as I come out of the forest, through the first small meadow and on to the big one, Rainier teasing me with glimpses. 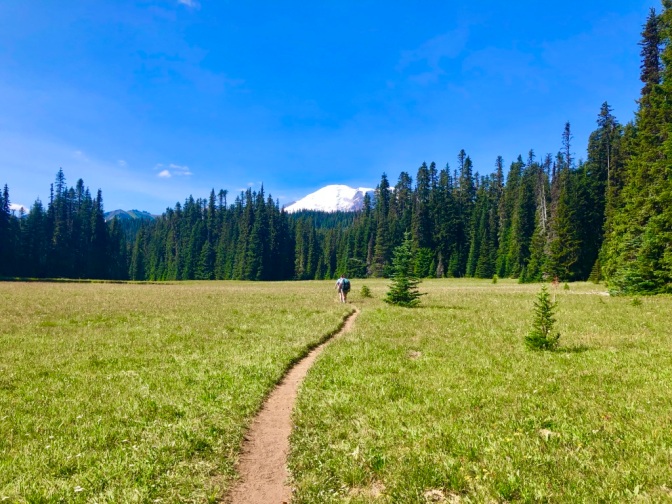 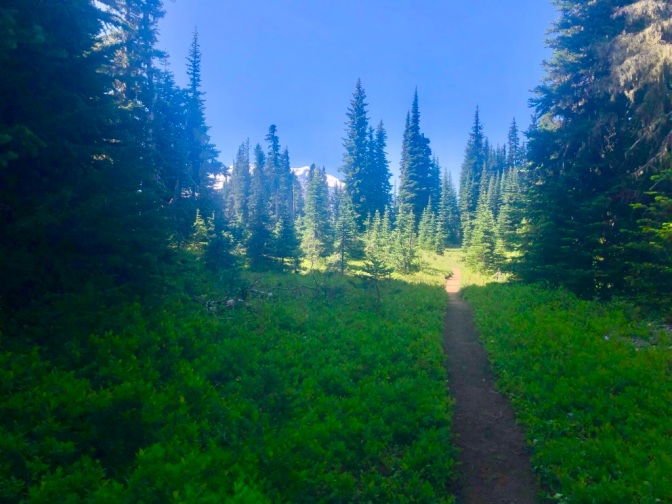 I make a note of the flowers I see, and I’m pleased to realize I know the names of all but three or four, a couple of which I still don’t know. I am learning! And remembering. Would my mother be proud? 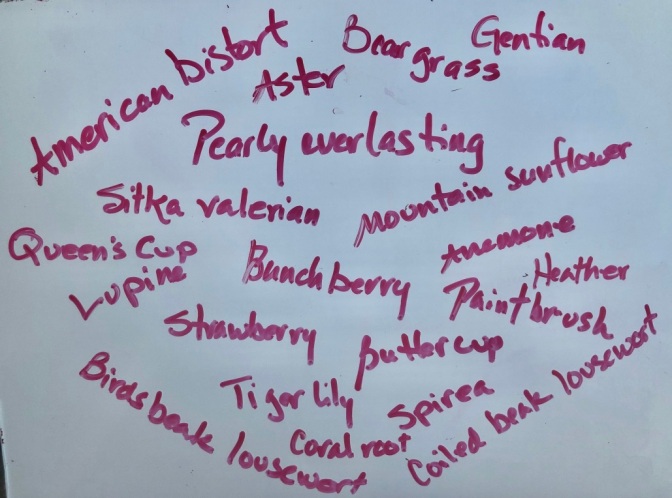 And then, there she is, full out glorious and in my face. I forget to breathe. 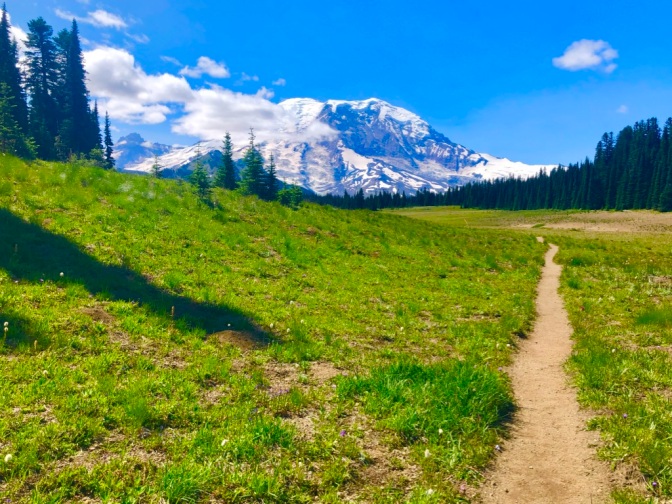 Once in the meadow, I stop again in the breezy shade garden amid a banquet of color to let the women pass again, still talking. I am ready to slow way down. (I don’t mind seeing people while I hike, I just don’t want to hear them.) Two grey jays flit in the firs, flirting with me and each other. My parents, I think, welcoming me to their paradise. Patterned moths and tiny blue butterflies dart joyously here and there among the flowers. A chipmunk sits up as I pass by. I stop and watch her, then leave before she does. We are with you, they all seem to be saying. We are one. 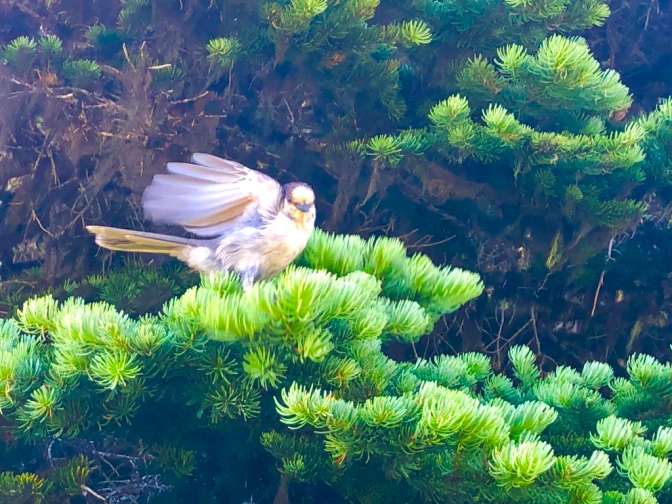 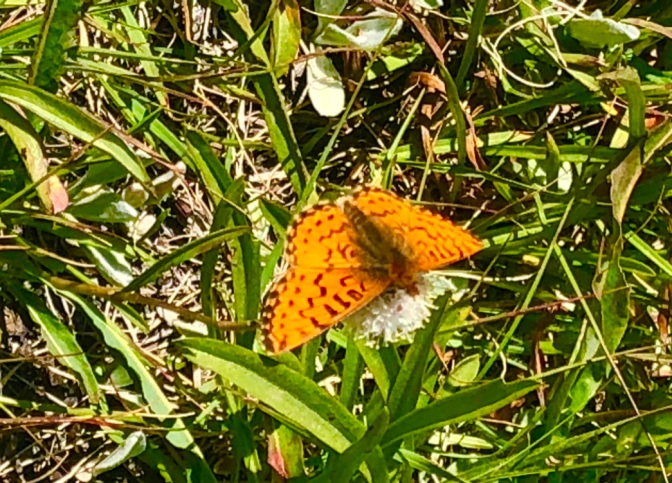 In the shade there were many flower varieties, but here in the open meadow are mostly bistort and lousewort, their white heads waving in the light breeze. I see some evidence that there were more, but faded now. I wonder what it looked like two weeks ago, when my plan to come here was rained out.

I decided in advance not to take the side trail to the valley overview of the White River. (This photo is from last year; you can read that Adventure Log here.) I want to wander to the far end of the meadow this time instead. 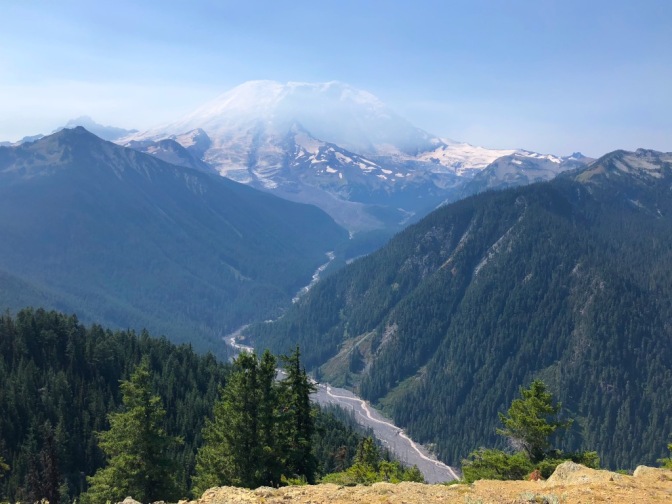 I’m greeted at the south end with the remains of hundreds of past bloom and munched off bear grass stalks. I love bear grass and I’m disappointed they are gone. But I keep walking and there they are, a bear grass bonanza. They make me giggle, as I walk through them, nearly as tall as I am. Unlike the redwoods, they have no permanence; and yet, like the ancient trees, they stand in community and greet me from beyond time, happy to be here in this moment before they succumb to being food for hoofed animals and bedding for bears preparing for deep winter snows.

I walk down a couple of switchbacks before turning back, this trail going to the Sunrise entrance to the national park, the more popular but much longer route to this meadow. Rainier peaks through the trees, the clouds beginning to obscure her. The same thing happened last year: spectacular in the morning, disappeared in the afternoon. The early bird…

Back in the middle of the meadow, I eat my lunch then head for the car and the long drive home. Three-quarters of a mile from the road, I pass the chatty women again, resting on a log. They are still talking. This time I notice one of them is closer to my age than I realized; that they are probably mother and daughter. I want to take back my uncharitable thoughts. I would like to hike with my daughter; now I’m envious.

My strong body has done it again. My intrepid spirit has brought me to a beautiful wild place without fear once more. When one or the other gives out, I will have nothing to prove. I already have.

P.S. If you missed the photo journal of my road trip down the Oregon coast, here it is again.