The strangest thing happened last night as I was pouring water into the Christmas tree stand, having once again managed to install a nine foot tree by myself–and straight. The strange part happened completely without build up.

Later I realized I buried my cat Smudge two years and one month ago this week. I pulled up my post about it from my former blog (Daughter on Duty, about the years I spent caring for my mother to end of life, along with the diabetic Smudge). I’m reprising that post, with a surprise ending.

I’ve been begging for weeks, months even, “Give me a sign. Please. Tell me it’s time.” I’ve responded to Smudge’s wailing, loss of appetite, weight loss, excess shedding, dehydration, long naps and inactivity by giving her more or less insulin. What the hell kind of sign do you want? she asks.

I want more clarity, that’s what I want; something I can’t fix with an injection a couple times a day. I don’t want to feel like I KILLED her because I was tired of cleaning up vomit and stepping on kitty litter, vacuuming cat hair and interrupted nights. But she needs me to be in charge because she can’t be.

When I moved to the country five years ago, I stopped letting her outside where the coyotes and hawks roam. I took away her ability to choose her time, or have it chosen for her by a creature whose only mission is its own survival, who doesn’t feel remorse like humans do. Like I will.

Two weeks ago I was nearly ready to say goodbye. Then she had a sugar crash: too much insulin. I rubbed her gums with corn syrup, held her, and reduced the dosage. Of course that stretched the bit of insulin in the bottom of the vial I didn’t want to refill, bought me time to change my mind, for her to give me a clearer sign one way or another.

Last week was a better week than she’s had in a long time. She didn’t vomit, or walk wonky; though she was still constipated from dehydration, she “kept it in the litter box”; she joined me in the living room to sleep in my lap in the evenings and entreated me for scratch time in bed again. She’s better! I thought. She’s telling me she wants to stay.

But is she really? I’ve heard of humans at life’s end seeming to rally then suddenly plummeting into death. Is that what she was doing? I had to decide, now: make the appointment to help her go or buy another $180 bottle of insulin and keep propping her up as she yo-yo’s her way to the inevitable last breath. 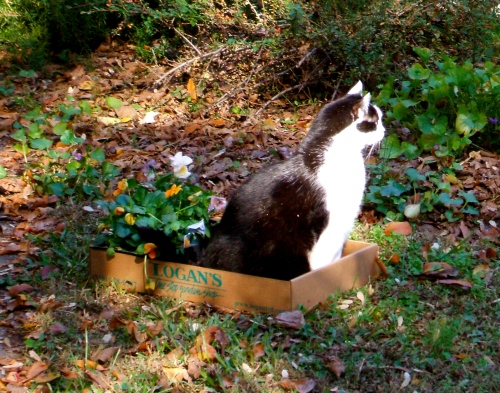 In the late day setting sun on Monday, I noticed the maple tree at the corner of the house was suddenly bare. One day it was brilliant red, the next day the leaves were all on the ground, blanketing the spot where Smudge will be buried.

That night, she started her mournful crying again in the middle of the night, begging for a drip in the bathtub, the only place she will drink from the past few months. Except she kept crying even after I turned it on; it wasn’t enough to satisfy her thirst, but she won’t drink from her bowl. Neither of us slept for hours.

She was restless, on and off the bed. My monkey mind turned over and over when I could take her to vet and that my sister was available to go with me. There was only one option before I run out of insulin: Friday morning. Why did I need multiple options? Maybe I wanted a back door, could I make the insulin last until next Tuesday? By then would it be clear? Or should I just order more and give her time to…what? My mind wouldn’t shut off.

The owl hooted, nearer by than usual, just a single haunting call through the fog beyond the open window. Smudge lay down on my legs, finally silent. My mind quieted then, and I fell into a brief sleep at 5am and dreamed of her catching mice in the phlox in Raleigh.

When the vet’s office opened, I called and made an appointment for Friday morning. And then I sobbed. I wept in relief for the decision, in grief for the loss, in gratitude for 17 years with this companion, longer than any cat I’ve had—and just a year short of the longest live-in human relationship I’ve had. Before the rains came, I dug a hole under the bare maple.

I don’t think I will grieve her loss as long as I have her predecessor Maggie. I don’t know if I will feel the loss of my mother as deeply as I do my father. I think some of those who walk with us for a time take up a bigger space in our hearts than others do. And though we love some no more nor less than others, some holes heal and some we merely learn to live with. This I know, those we have loved and been loved by are always and forever a part of us.

Smudge will be buried under the maple, where life will go on above her. Each spring buds will burst with new life; in summer green leaves will be the playground for birds and squirrels; autumn will bring dazzling crimson, a last hurrah before rain and snow batter and bend the bare branches through the long winter sleep. And then spring will return in the endless cycle.

The price of the capacity to love is grief; the gift and the curse of being human. Namaste my feline friend; I bow to the light in you.

Though my family had a dog before I was born, cats are the only four-legged pets I’ve ever had. Well, except for the horse. We had outdoor cats throughout my childhood. A few months after marriage, I had my first indoor cat, and have had one (or two)—except for a few years in the 80s (I was the only cat lover in my family)—ever since. Until Smudge died.

She was a high maintenance cat. And expensive. Diabetic for ten years, every time I went away, even just overnight, I had to get a friend or six to shoot her up with insulin twice a day. My mother died a few months after Smudge, and I was suddenly free of responsibility for another being for the first time in…ever. Where before I could never imagine not having a cat, the freedom of it has kept me from all desire the past two years.

In February, I board my sister’s cat while she is at buying shows on the east coast. GeorgeBailey is an exceptionally affectionate cat. Translation: under foot. all. the. time. Butting my chin with his head in the wee hours begging breakfast. Sitting on the computer keyboard. Cat affectionados know the pattern. Each February my “no cat” resolve is strengthened.

That brings us to last night, watering the Christmas tree. On my knees, pouring the water, all of a sudden I wanted a cat. What the hell? It came out of nowhere. Triggered from imagining her lapping water out of the Christmas tree stand?

The feeling flooded me. It wasn’t a question. It wasn’t laced with “yes, buts.” I imagined the sound and movement of another being in my space. Something to talk to, to snuggle, to love and be loved by. The downside holds little sway still this morning. I remember when Smudge’s predecessor Maggie—my all time favorite cat—was ready to die. “You’ll know when it’s time,” the vet said. And I did. Does the same go for knowing it’s time to get another?

Maybe I’ll wait until after February. Will GeorgeBailey strengthen or diminish the impulse this year?