I have been having corona dreams,
little snippets about people not wearing masks,
standing around in groups—

Much longer ago than I have been alive
the trail through the woods was a wagon trail;
When my family moved here in 1960 there were
the remains of a puncheon road,
rotting planks that once served to keep wheels
from sinking in mud…

More commercials on TV have a Covid-19 theme,
they’re less startling than ones showing people
partying and eating and playing in close proximity;
masked shoppers don’t seem odd, oddly;
those without do;
we are settling in to this new normal—

My neighbor Robert who has walked in our woods
daily for decades told me last summer he saw
an apple on a tree on our shared access trail;
“how in hell didn’t we know?” he wonders, that
it was an apple tree…

My cat Lena has napped in my lap this week
and slept on my bed;
I’ve had her since January and never has she ever;
she is settling in too, or maybe stressed…

Robert conjures a wagon driver, eating an apple,
throwing the core off to the side of the road;
and now there is a spindly apple tree living—or at least not dead—
with a simpatico vine maple weaving its reedy stems
around and through, holding the bent over apple together…

There is a bear in our hill community,
into Robert’s bird feeders and Brad & Audrey’s garbage cans,
it masticated my jug of deer repellent;
a mother and 2 cubs were spotted up the road—

It’s been raining and I stayed inside
and it’s been sunny and I worked hard outside
and didn’t walk in the woods for a few days;
I dragged myself out late Monday afternoon
and headed down the muddy trail…

People carrying automatic weapons and not wearing
masks are screaming in the faces of masked police officers on TV,
who are protecting the protesters and putting themselves in harm’s way;
my son is a police officer—

The puncheon road finally rotted away years ago
or the planks dug up by errant teens on bikes, says Robert;
but right where it once was, where the vine maple has
arched tunnel-like across the trail since I was a child,
there is an apple tree…

States are starting to “open up” slowly, some quickly;
some people don’t want a new normal, but we aren’t going back;
a new death projection with premature relaxation:
134,000 by August—

—and now there be giant murder hornets

…and now there be apple blossoms. 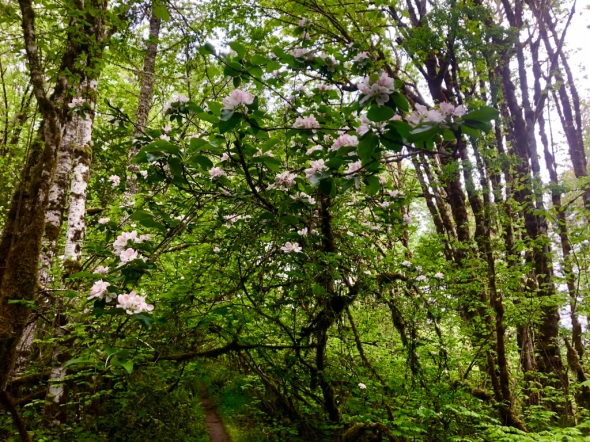 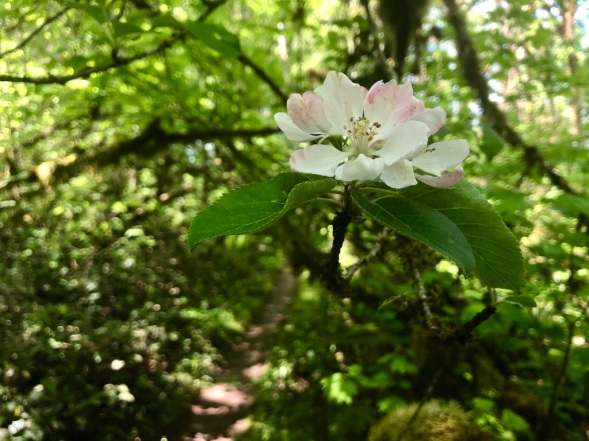 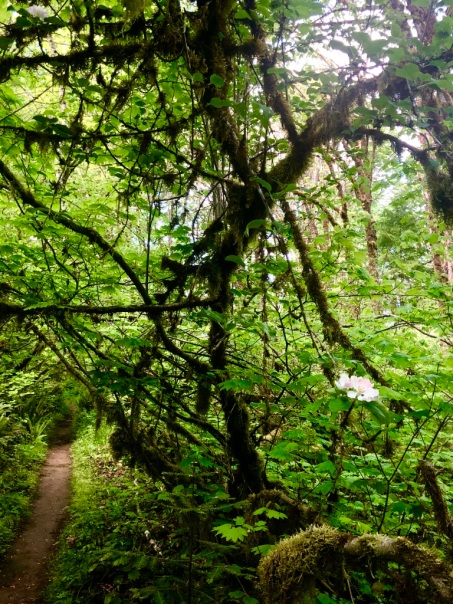 7 thoughts on “Apple Blossoms in the Time of Corona”