I was lucky to acquire my grandmother’s clock when the house where she raised her six children was being emptied this summer, following the death of my uncle.

I remember my grandmother (or my uncle or my aunt) winding the clock every day (or maybe every week) when I visited the family farm in Ann Arbor. It sat on a shelf my uncle had made above the beautiful desk he made in high school woodshop. (The desk is now mine too, when I find money to ship it here from Pennsylvania where my cousin’s son is caring for it.)

The note stuck on the bottom of the clock says my grandmother got it in the 1920s. The note taped on the back says it stopped running the day my grandfather died, not too long before I was born. They got it fixed, but eventually it stopped again and the works were replaced with a battery run quartz movement in 1993 (according to a note inside).

I finally put a battery in it today. According to the note taped inside the door, the battery was last replaced in 2002. I was thrilled to find that it runs! At first it didn’t, and I was disappointed. Maybe fearing that it wouldn’t is what kept me from putting a battery in it all these months. I had the battery in backward.

This afternoon I kept hearing an odd sound, I thought from inside the house, but I wasn’t sure. When I heard it again this evening, I checked my phone, thinking it was an Amber or Silver alert. No. Then I walked into the dining room, following the mellow pings. It was the clock!

I’m sure I knew it chimed, but I had forgotten. If I had remembered, I might have thought the chime went with the original works (at least part of which are in the back of the clock because my uncle never threw away a damn thing).

I am thrilled beyond all reasonable measure that it chimes, reminding me every 30 minutes of the farm and the young lives that were nurtured there. Reminding me of my own time there: playing with the barn cats, climbing in the hay mow, swimming in the lake, exploring the attic, hiding in the corn field, sitting around the big table eating bountiful meals while the clock chimed twice an hour. Seeing my grandmother pick up the key to wind it.

And now I’m thinking of the song we sang in elementary school music class: My Grandfather’s Clock. Listen to Johnny Cash sing it here. 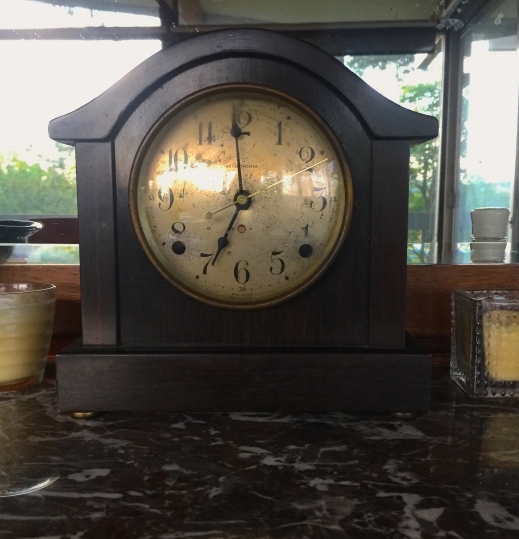 4 thoughts on “My Grandmother’s Clock”